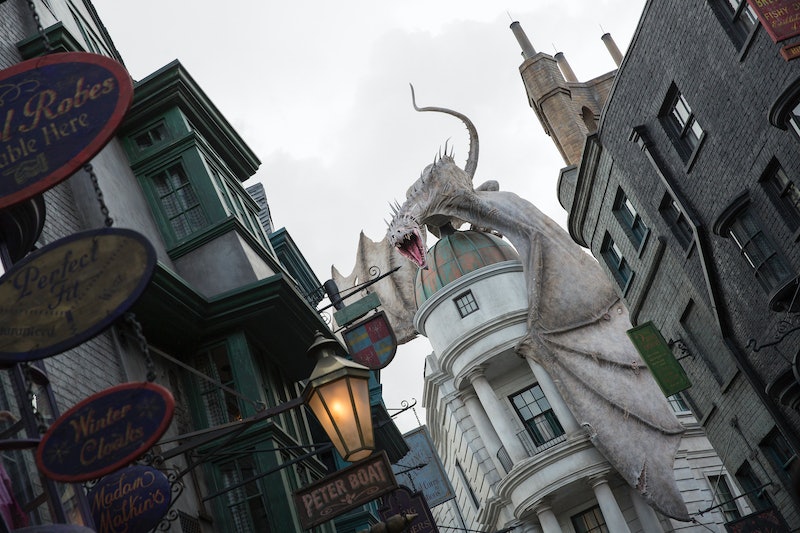 Gone are the days when then the wizarding world was just confined to the U.K.: It seems now, it has now spread its reach to the United States and around the world. According to HelloGiggles, on Halloween weekend, Diagon Alley is coming to Ithaca, New York, as the city is transforming its Press Bay Alley into the famous Harry Potter shopping street. Owners of the shops along the street will dress up in wizard robes for trick-or-treaters, and there will be prizes awarded for the best attire. There will also be a circus performance, free-flowing hot cider, and an "electric broomstick" demonstration from a bike shop.

This is a great idea for celebrating Halloween, and it's not the first time that Diagon Alley has found itself operating outside of London. Everywhere from city streets to college campuses have transformed themselves into Diagon Alley and/or Hogsmeade for occasions like the book releases or the Halloween season. It's actually really easy for any street to become Diagon Alley, and it's a great way to celebrate the fall season. But, how can Ithaca make sure it's done right? Here are the easy essentials that any muggle world Diagon Alley needs.

While bricks magically moving to reveal the alley might be a little ambitious, everyone will get the idea if the welcome sign is painted on a brick motif.

Whether hot cider becomes "butterbeer" for the evening or you find one of the many butterbeer recipes available online, any makeshift Diagon Alley equivalent has to have some butterbeer — maybe even pumpkin juice.

An easy way to make any landscape look like it's straight out of the Harry Potter books is for everyone, especially store owners, to wear black robes.

Any local bank can be transformed into the second-most secure place in the wizarding world by making a small alteration to the sign. No goblins required.

Similarly, any participating café or bar can become the Leaky Cauldron with a temporary name change, maybe some thematic menu items, and a slightly more medieval decor.

There are lots of food references in Harry Potter, from Pumpkin Pasties to Bertie Botts Every Flavor Beans. There are lots of ways that you can incorporate these treats into Diagon Alley, from selling the licensed Harry Potter candy to using a recipe online to renaming a pre-existing treat.

While not every town has anything like an Ollivander's, setting up a shop to sell or hand out wizard wands — which (hint) are remarkably similar to sticks — is a good way to pay homage to Diagon Alley's most iconic shop.

While it's technically in Knockturn Alley, it's too easy for an antique shop to transform into this creepy store to pass up.

Again, any ice cream shop can become Florean Fortescue's (RIP) shop with a change to the sign, and maybe a couple renamed fall ice cream flavors.

A sign pointing off into the dark toward Knockturn Alley is a good way to remind participants of Diagon Alley's darker companion.

If a full Quidditch game sounds too involved, a couple of chess boards set up can still pay homage to one of wizards' favorite games.

Any local theater can participate by screening one or all of the Harry Potter movies.

Nothing gets you in the mood for Harry Potter like hearing that iconic soundtrack, which is a great thing to play in the background of stores or, ideally, blast throughout the street.

If you can't make it to upstate New York this week, why not try and transform your street, or even just your house, into Diagon Alley? Just make sure you get permission, and a magical experience is a few easy steps away.