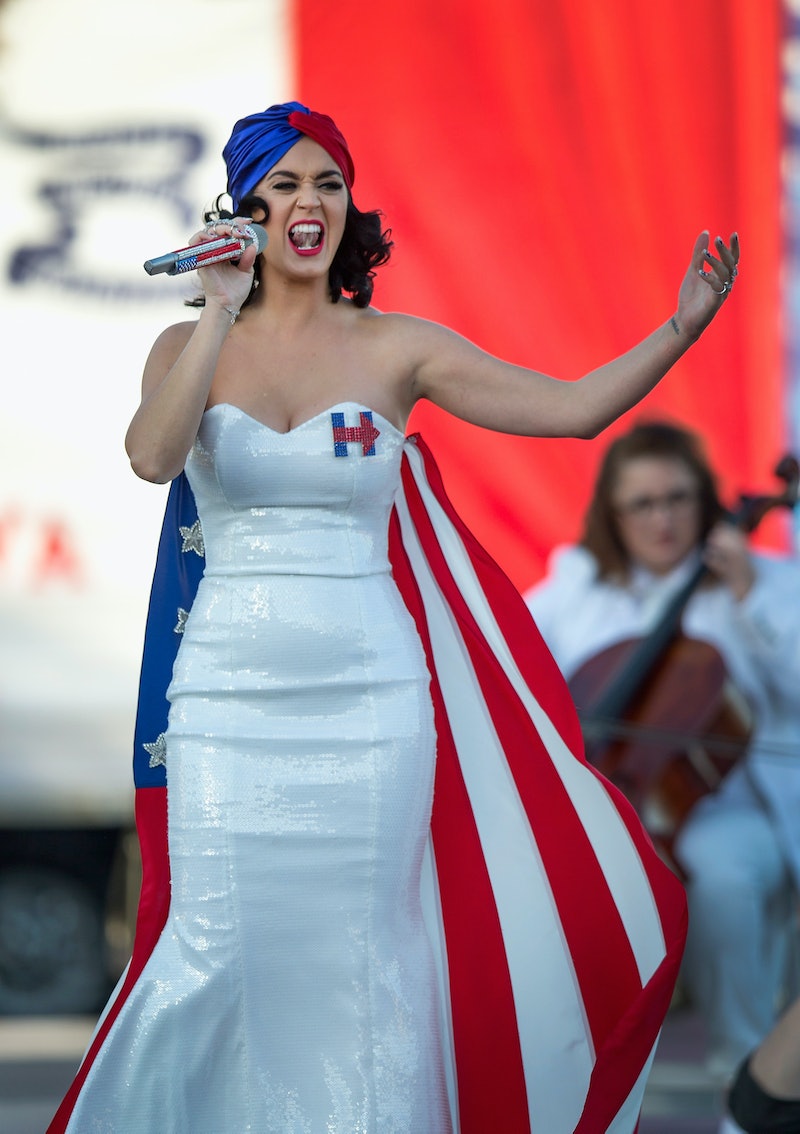 It's been a big few days for Hillary Clinton: Joe Biden announced that he wouldn't run on Wednesday, she weathered a grueling 11-hour day at the House Select Benghazi Committee on Thursday, then an interview with MSNBC's Rachel Maddow on Friday, on top of campaigning. And Monday is a special occasion, too — it's Clinton's birthday, and on Saturday, she apparently got a very thoughtful present. At the end of a day of rallying for the Democratic frontrunner in Iowa, Katy Perry gave Hillary Clinton the perfect birthday gift, at least if things go the way they're both hoping.

Clinton is turning 68 years old on Monday, and if anyone you know makes any sexist or ageist statements about that, you can remind them that she's the same age as Mitt Romney (actually, months younger). It's got to be a dilemma figuring out what to get someone in Clinton's position, because most people don't get a very close view into the private lives, wants, or desires of politicians.

But all things considered, Perry did a pretty good job. Amid her takeover of Clinton's Instagram account on Saturday, part of the all-day Katy Perry extravaganza that the Clinton campaign put together (there was also a concert), she sent out this picture of the early birthday gift. It could be a bit of a jinx, sure, but who believes in superstitions anymore?

Perry's public support for Clinton comes as no surprise — in June, she posted a photo of herself with Clinton during the Hard Choices book tour on Twitter and Instagram, and mentioned that she'd offered to write the campaign a theme song. But even so, the fact that she took this weekend to rally for them, of all possible times, is noteworthy. Katy Perry's own birthday is Sunday, October 25, a fact she referenced in the Instagram caption: "fellow Scorpio."

Perry is clearly a popular woman around the Clinton campaign — her hit 2013 song "Roar" was in the playlist at Clinton's June presidential announcement speech on New York City's Roosevelt Island, and Clinton has referenced the song positively before, as she did at her rally Saturday. Considering the energy and enthusiasm Perry put into this, at a time when many people would've been planning their entirely non-political birthday parties, it wouldn't be a shock to see her involved in another campaign event somewhere down the line.

More like this
Watch David Beckham Belting Out Mariah Carey’s “All I Want For Christmas”
By Catharina Cheung
Mariah Carey Is "So Proud" After Her Kids Joined Her In The Thanksgiving Day Parade
By Stephanie Topacio Long
Bustle Daily Newsletter: November 23, 2022
By Hayley Schueneman
Matt Hancock Broke a Major Rule With I’m A Celeb
By El Hunt
Get Even More From Bustle — Sign Up For The Newsletter