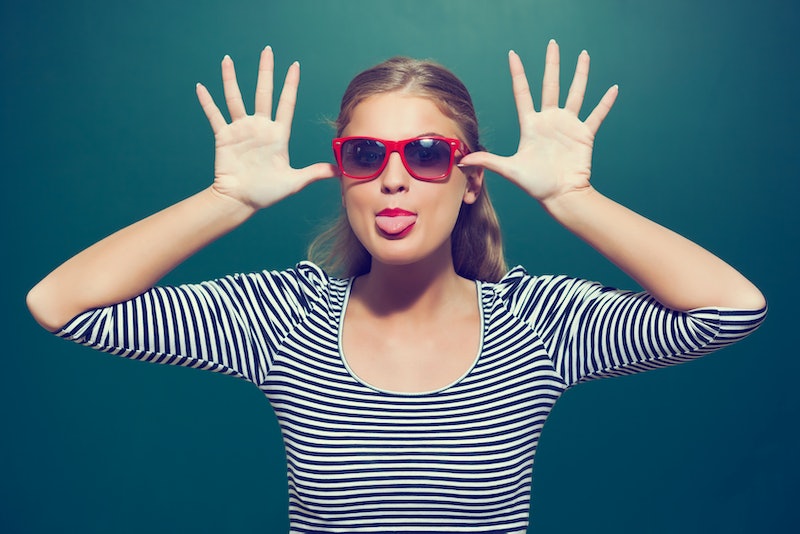 Making a joke at your own expense can seem like a good way to break the ice, but how does self-deprecation look to others? Thanks to a recent exploration on the topic by experts over at Hopes and Fears, we now know that making fun of yourself is actually kind of a socially risky move. In a strange and unfortunate twist, it turns out that making fun of yourself makes you look even cooler if you're already high-status, but it can easily make you look worse if you're not. So, congrats, you may have been shooting yourself in the foot at work and parties and on dates every time you yuk one up... oops.

Making fun of yourself is a superficially confusing phenomenon: why on earth would anyone subject themselves to any more scrutiny than what naturally occurs in social settings? The key to understanding it is to recognize that people are starting from different places on the social totem pole, and therefore have different goals in conversation. If you're very high-status, you want to convince people (especially egalitarian-minded ones) that you're not a bully or a threat to them. So, a little self-deprecating humor takes your edge off, and makes you seem cool but approachable — a win-win.

Unfortunately, if you're less than high-status to begin with, self-deprecating humor just draws people's attention to your already-apparent insecurities. That's why it's more awkward than funny if someone who's actually not too sharp jokes about how little they know about a subject at hand. The social script sort of requires that you "correct" them, and repudiate the self-deprecating comment, but you can't do it honestly!

There are some gendered conditions here, too. Men tend to make fun of other people more than they make fun of themselves, whereas women tend to make jokes at their own expense. However, self-deprecating jokes increase the long-term attractiveness of high-status members of both genders. If self-deprecation is such a good mate attraction strategy, why isn't everyone using it all the time? It's probably because it's hard to fake being high status, and the stakes are too high. So men go with a safe move — trying to make other people look bad, perhaps making themselves look better by implication. Nice!

In professional settings, making fun of themselves is especially unlikely to work for women, so this is a habit you'll definitely want to break for when you're in job interviews and such. Your capabilities and qualifications are unfortunately usually already in question by default, so joking about it is more likely to have the status-lowering effect than the status-enhancing one. But if you're sure you're really crushing it on a date, go right ahead and joke, because you've got confidence to spare, and you want your companion to know it.

More like this
What Is The Forest Personality Test? The TikTok Trend, Explained
By Georgina Lawton
Hinge's New NFAQ Feature Is Demystifying Queer Dating
By Emma Carey
The Best Time To Date After A Breakup, According To Experts
By Bustle Editors
The “Whisper Method” Is The Latest Manifestation Technique Going Viral
By Meguire Hennes
Get Even More From Bustle — Sign Up For The Newsletter