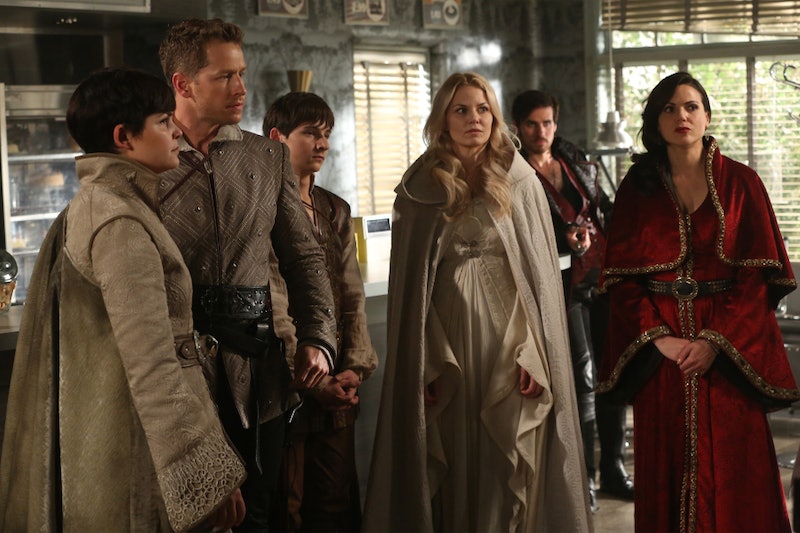 At the beginning of Once Upon A Time Season 5, it appeared as if the Big Problem was going to be getting Merlin out of the tree in Camelot. Emma, Regina and everyone else spent countless hours searching through magic books for spells to free the wizard from his woody dungeon. In the end, it wasn't that hard to free him, and by the end of "Dreamcatcher" he was walking and talking with everyone else. While everyone can celebrate, sure, this now raises a much bigger question: in present day, how is Emma still the Dark One? The whole point of freeing Merlin was so that he could stop her from being overtaken by the darkness.

It's still unclear how, and more importantly WHY, Emma erased everyone's memories in Camelot, but she saved them all in Dreamcatchers. (Aside: remember who else once had a Dreamcatcher? Neal. He and Emma had it in their original hotel room, and then Neal took it with him to New York City, and now if I remember correctly Emma's got it in Storybrooke. Or, she had it in Storybrooke before she became the Dark One, and who knows where it is now. The point of this aside is that Neal was mentioned five times tonight on OUAT, and for a sixth time Hook referred to him as "Balefire." Come back, Neal, I miss you)

Where was I before Neal? Right. Dreamcatchers. Emma's got a whole garden shed full of them, and they more than likely contain everyone's forgotten memories. I wish I could say that it's becoming clearer was to why she erased everyone's memory of their six weeks in Camelot, but honestly it's just getting more mysterious. Now that we know Merlin has been freed? What the heck happened there?

It wasn't as hard to free Merlin as was originally thought, and it was done so with a single tear from a broken heart (Henry's broken heart, to be exact). That's the spell to get someone out of a tree. So now Merlin's free, everyone heads over to Granny's, and even Arthur is there. It feels like no one has any bad feelings between one another. So now flash forward a few weeks to Storybrooke and Emma is full on Dark One, and Merlin is MIA again.

Something bad must have happened between everyone. Maybe something bad happened specifically between Emma and Merlin. Merlin was trapped in the tree by the original Dark One (we don't see their face) and maybe Emma has done the same with him. Maybe he couldn't stop the darkness in her, and she trapped him in another stump... out of spite?

Regina keeps suggesting that there's one specific thing that happened, so something kind makes me think that Emma might have accidentally killed Merlin. We haven't seen him in Storybrooke yet, and there could be a reason for that. He could be dead. To protect everyone from that horrible incident, Emma took their memories. I hate to say it, but it sounds like something the Dark One would do.