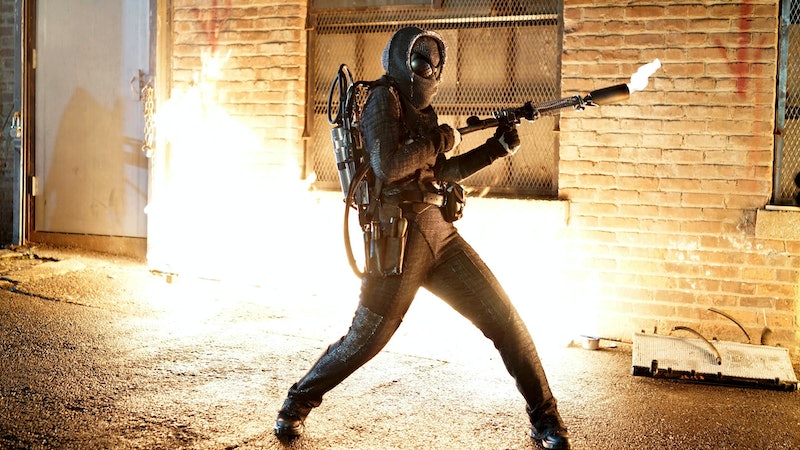 The Firefly is one of the newest villains to hit Gotham Season 2, and Bridgit Pike is proving to be one of the series' more inventive characters. She is technically an adapted character, but the writers haven't taken much of Firefly's DC Comics history for inspiration, making for a very different new villain. For example, Gotham's version is the first female Firefly, as well as the first teenaged iteration, which makes sense since Gotham is a Batman prequel that shows a younger version of most DC characters.

The dangerous Pike family and their arsonist past were invented for Gotham, but in the comics, there are two identities for the Firefly. The first is Garfield Lynns, a former special effects technician who turns to arson because of hard economic times. His most iconic appearance is in Knightfall, where his arson attacks around Gotham City, part of a larger plan, result in him being severely burned by chemicals and forced to recuperate in prison. That would not bode well for Bridgit. But there's another version of the Firefly character from the comics who has more in common with Bruce Wayne. Ted Carson is an heir to a wealthy family who loses his entire fortune while gambling, and turns to the alias as a result.

Both of those interpretations are pretty different from what Gotham is doing. Bridgit was forced by others to start burning down buildings, rather than turning to it in a time of need. And she doesn't seem cruel, or hurt innocent people, that one cop excepted. However, there are some similarities to the DC character beyond just the name. Bridgit's homemade costume closely resembles the outfit from the comics, with her inventive use of flame-slowing fabrics and the glasses she uses to protect her eyes. The only thing missing are the batlike wings that Firefly uses in some comics.

The most likable thing about Bridgit is that she has some vigilantism in her as well as villainy. Yes, she was responsible for the death of one of Gordon's new recruits. But until she put on her suit, she was crippled by a fear of fire (not easy when your brothers are all arsonists), and powerless to help herself or anyone else. Selina hasn't always been the truest moral compass on the show, but since she seems to distrust the Pike brothers' treatment of their sister and support Bridgit forming her own identity, I'd say that there's a chance that even after transforming into a "vengeful supervillain," as TVLine said she will, Bridgit could turn out to be more of a vigilante than a baddie.