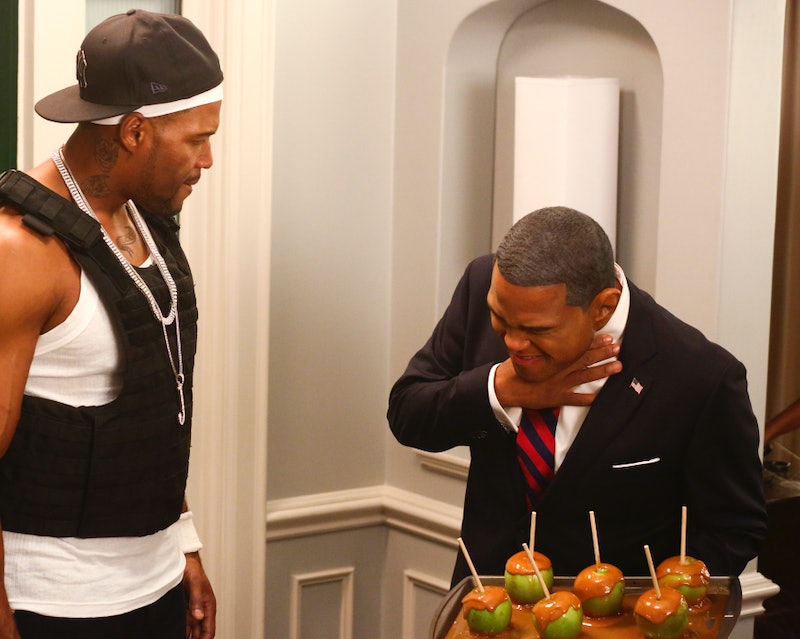 Dre's favorite holiday is Halloween, so of course there was going to be another big black-ish Halloween episode with a family-coordinated costume. And as a contrast to Dre's hood past, the Johnson's dress as a pitch perfect Obama family, with Junior as the world's nerdiest Secret Service agent and Jack as an adorable Beau the dog. But Dre's pride in his children is short lived when Dre's cousin June Bug, played by Michael Strahan, gets the surprise jump on him and reminds him of the wimpy kid he used to be, embarrassing Dre to the point where it almost ruins the holiday.

At first, the snappily dressed and besuited Dre thought that his success as a high-earning corporate executive would make him immune to his cousin's bullying, but just as his own kids learned, good-natured teasing, even if it means giving up some candy, is just a natural part of family relationships. The Johnson kids give as well as they get, and their cousins help them beat some bullies. And Dre eventually is forced to admit that June Bug is just a fun goofball.

Low key, the best part of the episode was flashback Ruby's background line about never getting an Afro because she doesn't "believe in all that." Second best is Bow admitted "I'm Janine! I've always been Janine!" The B story, all about the progressive Bow becoming fearful of the neighborhood kids, was missing a final confrontation with Janine to make it shine, especially because some of the kids' behavior was genuinely inappropriate. But as is, I don't really blame Bow for how she reacted.

The theme of the episode, which initially seemed like it would be about the privileged Johnsons becoming tougher, split in two directions. For Dre, it was about recognizing the sacrifices that June Bug and the rest of his "hood" family made in order for him to succeed, while they kids ultimately had to appreciate their cousins' tough sides in order to befriend them.

All in all, a sweet celebration of the holiday.