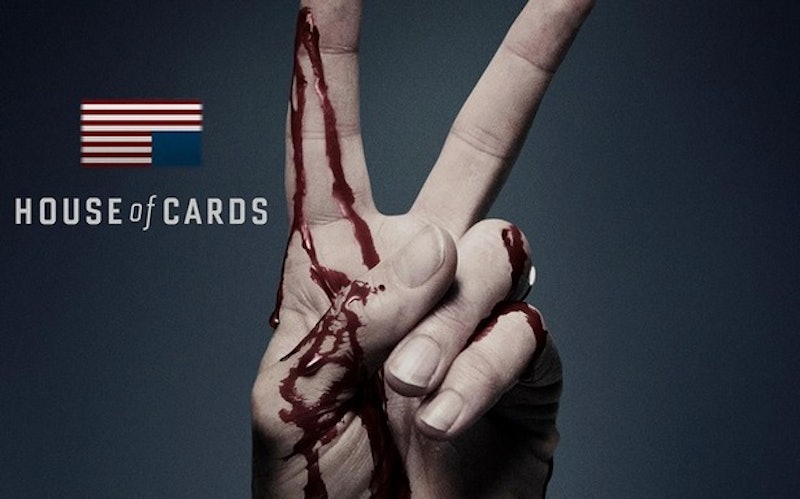 WELL, it looks like I have a date for Valentine's Day after all. And that lucky dude is Vice President (former House Majority Whip) Francis J. "Frank" Underwood (Kevin Spacey) from House of Cards, because Season 2 of David Fincher's Netflix darling comes back on February 14! Annnnnd because it's a Netflix original series, ALL of the episodes will be available all at once, just like Season 1, which premiered last February. Has it been that long? We finally got a full-length House of Cards trailer today from Netflix, a whole two and a half minutes of HELLA beltway drama.

This was hugely satisfying after two clipped, cryptic "cinemagraphs," as show creator Beau Willimon called them, one of which featured Frank Underwood snapping a rubber band, the other of Claire smoking a cigarette. EVERYONE LOOKS VERY TENSE!!! This trailer, however, begins with Frank getting sworn in as the VP and sinister Spacey breaking the 4th wall as he's wont to do: "One heartbeat away from the presidency and not a single vote cast in my name. Democracy is so overrated."

Oh snap, looks like it's getting Machiavellian up in this b. Here's the trailer, then, we get into what we questions we have for Season 2.:

Zoe Barnes (Kate Mara) confronts Frank about what he did to Peter Russo: "I need to know I wasn't part of someone's... murder." Frank is wearing a noir-y fedora in this scene, just in case you forgot he was sinister. I think Zoe will find out that YEAH Pete dead. From the trailer, it looks like Janine and Lucas know, too, that at the very least Underwood sabotaged Peter.

Who will become a bigger player?

Seems like some fringe characters are gonna come forth: Rachel, the prostitute that Underwood's right-hand man Doug Stamper is all twisted up with, is blackmailing Stamper. If she finds out Underwood murdered Peter, she could go public with the details of the whole sordid ordeal: Stamper bribing her to say she wasn't in the car the night he was arrested, getting him drunk for the radio interview, Stamper paying for her apartment. She's trouble for Underwood.

Will Stamper stop being such a doormat?

How much longer will Stamper, Frank's chief-of-staff/ henchman follow Underwood blindly? In the trailer we see the following conversation between Frank and Doug:

That's about the most Stamper has ever dissented with Frank, but it's enough to suggest it could go further and he could betray him or at least dissolve his loyalty.

What is Frank's end-game here? So he's the VP, and obviously he's gunning for the presidency. But is he first going to seek revenge on the President for screwing him out of the VP slot so many moons ago? Also, since this is probably the second and last season of House of Cards, is the house gonna fall? That would make sense, but this is a show that doesn't really follow any sort of moral code. Frank Underwood could very well find himself in the Oval Office.

Claire got a little baby-crazy at the end of Season 1, but in a very calculated, cold Claire way — she wanted a child to preserve her legacy. There was some graveyard weirdness at the end; I don't think she will be pregnant during Season 2, though, because it'd be a shame if her whole plotline was about a child when she's got soooo much more manipulation and evil to offer than that.

Will Raymond Tusk be friend or foe?

Tusk was probably the wildest part of Season 1; the billionaire who is the owner of San Corp and of the president's soul is the only one that can truly challenge Frank. I think he's gonna make Underwood scared in Season 2.

Without a damn doubt.

Don't forget to rewatch ALL of Season 1 before Season 2 premieres on February 14. (Rewatch it twice if you want.)

More like this
'Succession' Season 4 Will Be An "Absolute Banger" According To Cousin Greg
By Bustle Staff
'The Crown' Season 6 Has Suspended Filming "Out Of Respect" For The Queen's Death
By Bustle Staff
Everything To Know About 'RHONY' Season 14
By Jake Viswanath, Alyssa Lapid and Brad Witter
You Might Want To Rewatch This Key 'On My Block' Scene To Understand 'Freeridge'
By Grace Wehniainen
Get Even More From Bustle — Sign Up For The Newsletter
From hair trends to relationship advice, our daily newsletter has everything you need to sound like a person who’s on TikTok, even if you aren’t.