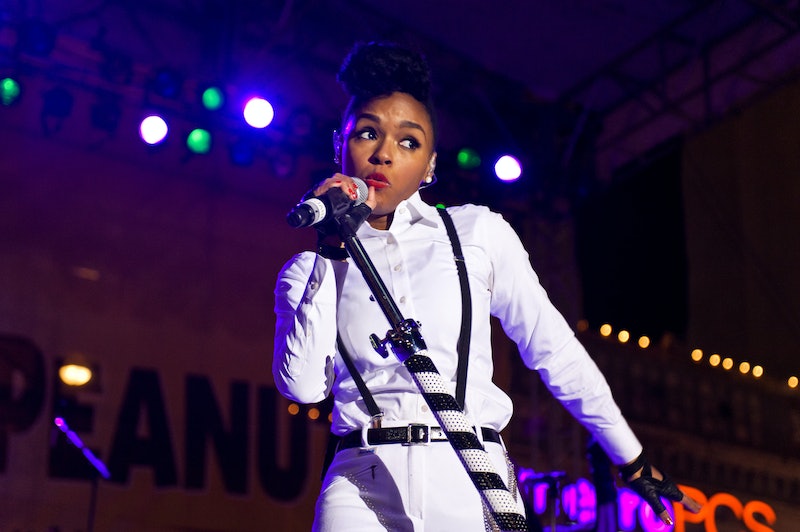 Janelle Monae is the most under-appreciated artist of this year. It's not Ke$ha. It's not Katy Perry. Let's face it, Ke$ha hasn't made a splash in a while, and Katy's musical (and life) choices with PRISM were questionable at best. Janelle Monae, however, put out a game-changing album in September, and nobody is talking about it. Yes, it has made a few of those "Top Albums of 2013" lists, but she wasn't nominated for a single Grammy, nobody compared her album to Beyonce, and when she started touring with Prince, nobody seemed to care.

Annoying pop junkies like myself, it's time to slick up your hair and take notice, because The Electric Lady deserves your attention. Janelle Monae is clearly an android from the future who wants to show us how to be cool.

The album has all of the components of a pop sensation: a clever theme, driving hooks, a few heartfelt moments, and stirring vocals. Janelle Monae collaborates with the killer pipes of Erykah Badu, Solange, Miguel and Prince,stacking the deck for collaborators. It also is the second installment of her futuristic saga started by ArchAndroid, and this sophomore effort lives up to her splashy debut. Instead of playing it safe with a few punchy singles before the album's release, Janelle released the Q.U.E.E.N. video, which felt like a transmission from a swagger-infused future, telling us to get our act together and get on the Queen Android's level.

If you haven't seen it, it features Janelle's kickass dance moves, a lot of black and white, Erykah Badu, and a poodle that walks like Duchess Kate. Before we had the "visual album," we had Janelle Monae's visual alchemy.

Although Q.U.E.E.N. cries war to all kinds of stereotypes, The Electric Lady goes even further. I usually don't like skits on rap albums, since I have the attention span of a gerbil for recorded speech, but the Janelle's skits, which use the divisions of different androids to discuss portrayals of race, sexuality, and gender, made me sit up and take notes. I still remember the moment where a male voice says "Robot love is queer." Janelle was also forthcoming in discussing the origins of the album, and she has not one, but two songs dedicated to empowered women Sally Ride and Dorothy Dandridge.

She does all of this, while still making music that is both relevant and timeless, with hooks that both rival this year's pop songs and reach back to the best parts of the '60s. Listen to Prime Time and try not to sing along.

So, instead of reading the 105th piece on Beyonce, maybe we should listen to Janelle Monae, King of Androids, The Electric Lady, and the best songstress of the year. Maybe we could learn something about inclusion, Sally Ride, Philip K. Dick, or the future of pop.

Because The Electric Lady does it all, and we should try to keep up.