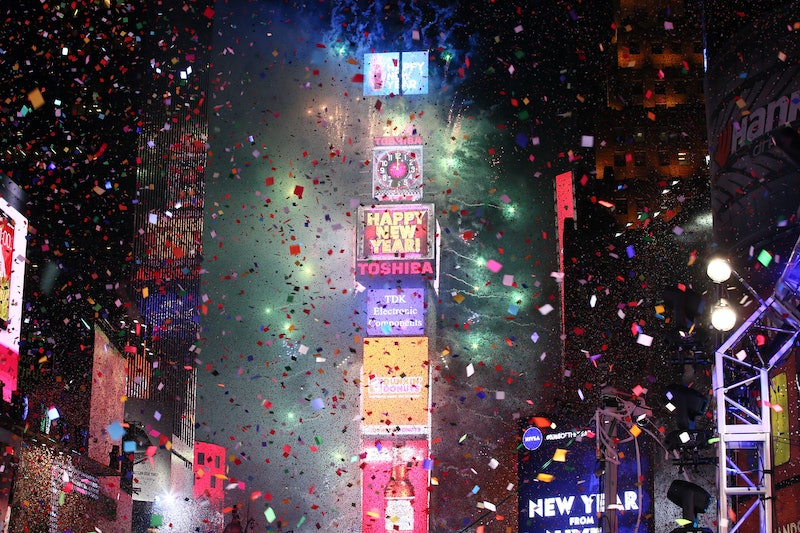 Hi there, 2014!... and buh-bye, all of our plans and resolutions for the new year, by Jan. 10. At the latest. If you wanna kick-off a healthy habit or get rid of a bad one, it feels like there's no better way to do it than at that time of year when everybody gets a clean, new slate. Unfortunately, as you, me, and science already knows, they usually don't work. So why not, science?

Apparently just 8 percent of Americans keep their New Year's resolutions, despite 45 percent of them pledging a goal. And why? Well, it seems like we're going about them the wrong way. "Think of health and fitness like the stock market," recommends exercise physiologist Jacqueline Ratliff. "Your goal in initially investing is not to get rich quick, it is to secure long-term wealth or, in this case, health."

It's like crash-dieting: You want resolutions to last a year, but simply kicking them into action like a light-switch is only going to give you short-term results. Like that time that "dry January" lasted a whole three days.

According to Uri Gneezy, professor of economics and strategy at UC San Deigo's Rady School of Management, making a resolution last has something to do with behavioral economics. And depending on whether you want to give something up or get something going, there are two ways to go about it.

First off, writes Gneezy, don't make resolutions that depend entirely on the strength of willpower. Research indicates that our brains are less likely to resist temptation over time: Be good, be good, be good, you say to yourself on days one through five of your "I shalt not eat carbs" kick. But the self-control muscle in your brain that keeps you from eating that pasta gets tired of saying no all the time, as Roy Baumeister found in his study on willpower.

So then, suddenly, it's all, "I shalt not eat carbs as often" — as you tear into a panino like a starving wolf. The next thing you know, it's Friday night, and it's just you, a baguette and a pot of hummus.

So your pre-frontal cortex that handles willpower is like a muscle, that needs to be trained ... If you decide to train that muscle at the start of the new year with a resolution to quit smoking, start going to the gym, or lose lots of weight, that’s the equivalent of a 300 pound barbell you want to lift without any previous training.

Ain't nobody got time for that.

Get in a habit. Seriously.

Getting into a habit is like muscle memory writ large: If you start going to the gym every day, then not only will your weight routine get easier (in which case, time to switch it up!), but it'll be easier to actually get to the gym. Do what it takes to get into that habit: Pay yourself or treat yourself to a coffee afterward. As it gets easier to go the gym, gradually wean yourself off of the rewards system — the workout will be its own in time as you get healthier.

It sounds silly, but sometimes you have to trick yourself like this. One weight-loss resolution that Gneezy mentions is to trick yourself into eating less instead of being all, "It's diet time!" Putting food on a smaller plate, for instance, does the job instead of consciously going for smaller portions.

More like this
10 Stranger Things-Inspired Halloween Costumes For True Fans
By Emma Carey
10 Pumpkin Recipes That Are Way More Creative Than Pie & Lattes
By Rebecca Deczynski and Alexis Morillo
Bennifer, Kravis, & 14 Other Fun Celeb Couples Halloween Costume Ideas
By Emma Carey and Brittany Leitner
7 Symbolic Meanings Of Autumn — From Letting Go To Self Preservation
By Kirsten Nunez
Get Even More From Bustle — Sign Up For The Newsletter