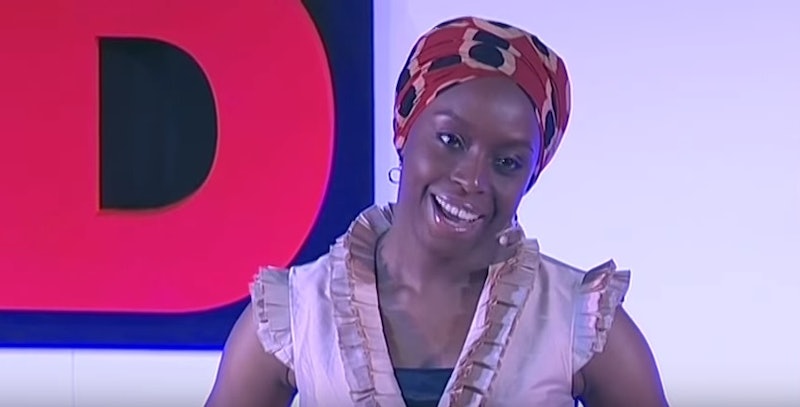 If you’ve ever finished reading a book and immediately found yourself wishing you could have coffee/drink wine/seek spiritual counsel/go shoe shopping with the author, a literary TED talk — or several — might just be the quick fix you need (at least until Amy Tan finally responds to all those emails you’ve been sending her.) Tons of writers have stepped away from their desks to take the enormously intimidating leap onto the TED stage, speaking about everything from their creative origins and spiritual inspirations to the pitfalls and successes of taking on the responsibility of writing emotionally and culturally resonate stories. Elizabeth Gilbert has even given more than one.

If you’re unfamiliar with the world of TED (don’t worry, I was too until recently) TED talks are basically 10- to 20-minute world changing, life affirming, action inspiring public service announcements, given by public figures who have been selected by the mysterious and revered TED committee. TED talks by writers, in my opinion, are by far the best of these.

Now, I definitely know how binge-worthy these little monologues can be, so I’ve saved you the trouble of getting lost in the 2,000-plus videos currently available for viewing on TED.com (although if you’re feeling those binge-viewing vibes, by all means watch away.) Here are seven cannot-miss TED talks by authors that will motivate and inspire you to creative greatness, no matter what your chosen vocation is. Give ‘em a listen.

The Danger of A Single Story by Chimamanda Ngozi Adichie

The amazing Chimamanda Ngozi Adichie, author of the novel Americanah and other books, talks about her early days as a writer and how her childhood reading informed her early writing. Discussing a moment when her writing was criticized for not being "authentically African" (whatever that may be) her talk stresses the importance of reading diversely and exploring cultural similarities as much as we do cultural differences. Adichie teaches me something new literally every time she takes to page or stage.

Opening with the acknowledgement that the greatest of her life's work may be behind her (gotta love the candidness) the author of books like Eat, Pray, Love and Big Magic discusses, with great honesty and hilarity, her ideas about achieving success after already-great success, the trouble with fear-based living, the anthropological origins of creativity and genius, the relationship between humans and the creative mystery, and elves. It's amazing.

Tales of Passion by Isabel Allende

With unflinching honesty and a bit of humor, author of breathtaking reads like Daughter of Fortune , The House of the Spirits , and more, Isabel Allende speaks about carrying an Olympic flag, being recognized in Macy's, and writing truths that are "truer than true." Using examples of female survivors of great adversity from around the world, Allende shares ideas about feminism; creativity; making the world not just better, but good; and the passion required not only to create art, but also to survive life.

The Politics of Fiction by Elif Şafak

Author of The Architect's Apprentice and several other novels, Elif Şafak is a writer working in both English and Turkish, who bridges political, cultural, and religious differences in both her writing and her life. She speaks about how, as a Muslim woman, she is often expected to write the representative stories of all Muslim women, and takes a critical stance against the expectations put upon all multicultural writers. She celebrates literature's ability to take us beyond ourselves, and emphasizes the importance of connecting to a world beyond that of those who look, sound, and believe exactly as we ourselves do.

The Power of Introverts by Susan Cain

Taking on the same theme as her book Quiet: The Power of Introverts in a World That Can't Stop Talking author Susan Cain opens her TED talk with a hilarious anecdote about reading and summer camp, presents examples of famous, world-changing introverts, explore the historical transition from valuing introverts to valuing extroverts, and encourages all introverts everywhere to continue being their quiet, introspective selves.

Where Is Home? by Pico Iyer

Traveler and travel writer Pico Iyer, of The Global Soul: Jet Lag, Shopping Malls, and the Search for Home and literally so many other travel books they're impossible to count, speaks about the significance of geographic origins on one's identity, voyages of discovery — both through travel and through personal introspection, the importance of sitting still, the challenges faced by individuals who spend the majority of their lives living in foreign landscapes either by choice or circumstance, and the necessity of stepping outside the familiar in order to discover the self. He ends with the idea that home is what you carry inside of yourself.

Where Does Creativity Hide? by Amy Tan

Perhaps best known for her novel The Joy Luck Club , author Amy Tan explores topics as diverse and wide ranging as the identity crises inherent in childhood, the essential questions that all creative people are trying to answer, physics: specifically string theory and it's connection to what she terms the "11 levels of anxiety," the moral ambiguities that have driven her own creative life, and the idea that imagination and compassion are intimately linked. Keep a pen and paper by you for this one — you'll want to take notes.