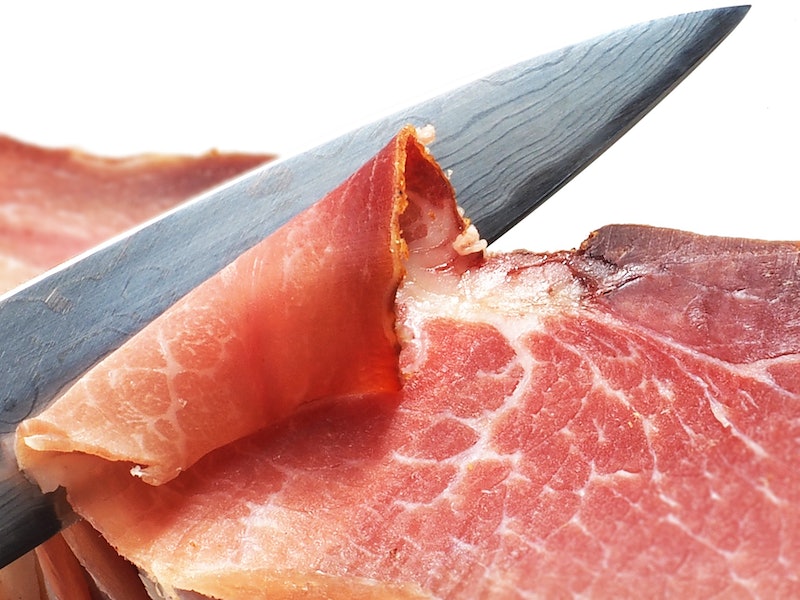 On Monday, a working group of the World Health Organization (WHO) reported that processed meats pose a significant cancer risk, and that red meat is probably does as well. These findings are the result of a study by the International Agency for Research on Cancer (IARC) that analyzed more than 800 studies researching the connections between processed and red meat and cancer. The IARC’s findings may have you suddenly questioning your meat intake, but here’s what you need to know before your next bacon-fest:

In a report published in the The Lancet Oncology, the IARC differentiates between two classes of meat: Processed meat and red meat. Processed meat is meat “that has been transformed through salting, curing, fermentation, smoking, or other processes to enhance flavour or improve preservation.” Most of these meats are made of beef or pork, but some will contain other ingredients like poultry or meat byproducts (like blood. Sorry vampires!). Some common processed meats thus include things like bacon, hotdogs, and sausages. Red meat, in contrast, “refers to unprocessed mammalian muscle meat,” like beef, pork, lamb, and veal.

While the IARC identifies both types of meat as potentially problematic, processed meat is the type of which we need to be most careful. The IARC report states, “Overall, the Working Group classified consumption of processed meat as ‘carcinogenic to humans’ on the basis of sufficient evidence for colorectal cancer.” The group also found associations between processed meat and stomach cancer. The data on red meat was less definitive, but the IARC, finding links between red meat consumption and pancreatic and prostate cancer, classified it as “probably carcinogenic.”

To put these findings in perspective, the WHO has a ranking system it uses to define carcinogenic agents. Group 1 includes substances that definitely cause cancer, including tobacco and solar radiation — this is the group into which processed meats have been placed. As the BBC emphasizes, that does not mean that processed meat is as dangerous as smoking; it simply means that it definitely causes cancer. (The IARC claims that diets heavy in processed meats may cause as many as 34 thousand deaths a year; smoking causes almost 30 times that amount, at one million deaths per year). The next classification group, Group 2A, contains substances defined as “probably carcinogenic to humans,” including red meat. Other classifications include Group 2B (“Possibly carcinogenic to humans”), Group 3 (“Not classifiable”), and, finally, Group 4 (“Probably not carcinogenic.”)

The IARC’s report isn’t the first time that researchers have argued that there may be health risks associated with meat — After all, this report is the culmination of a lot of previous studies. Although the IARC report focuses primarily on associations between meat and colorectal cancer (aka cancer of the bowel, rectum, or colon), stomach cancer, pancreatic cancer, and prostate cancer, previous research has suggested that other health risks may be a product of red meat and processed meat consumption. In 2014, for example, Maryam S. Farvid, a scientist at Harvard, published research finding that beef and other types of red meat can increase one’s risk of breast cancer. That same year, scholars at the Lerner Research Institute found that the way the gut reacts to carnitine, a nutrient in red meat, increases one’s risk of heart disease; as the Cleveland Clinic points out, this study was only one of several suggesting a link between red meat and heart disease. In 2013, the Harvard School of Public Health (HSPH) also reported that consuming red meat could contribute to the development of type 2 diabetes. (It’s important to note that in its own analysis of previous studies on red meat and cancer, the IARC found that “chance, bias, and confounding could not be ruled out.” Thus, the group could not make as definitive a statement about red meat causing cancer as it was able to make about processed meat and cancer.)

So why is this report important? Although concerns about the cancer-causing capacity of meat are nothing new, the IARC report is especially noteworthy for its scope and its association with the WHO, the UN agency dedicated to international public health. As NBC has pointed out, the IARC’s recommendations are also unusually definitive. Whereas in previous studies, researchers have qualified their findings with phrases like “may cause cancer,” this report doesn’t beat around the bush, stating unequivocally that processed meats cause colorectal cancer.

Advocates of the meat industry have argued against such findings. In anticipation of the IARC’s report Monday, The North American Meat Institute argued that the IARC was guilty of “dramatic and alarmist over-reach,” according to the Financial Times. Robert Pickard, a member of the UK’s Meat Advisory Panel and professor at Cardiff University, said, “Avoiding red meat in diet is not a protective strategy against cancer. Choosing a meat-free diet is a lifestyle choice; it is not vital for health.”

So what does this report mean for you and your brunch?

Don’t panic: The IARC’s findings don’t mean that you have to completely abandon bacon and steak forever. According to NBC, Dr. Kurt Straif of the IARC suggested, "For an individual, the risk of developing colorectal cancer because of their consumption of processed meat remains small." However, your risk of cancer increases according to how much processed meat you eat; the IARC estimates that your risk of colorectal cancer increases by 18 percent when you eat 50 grams of processed meat (less than two strips of bacon).

The key with red meat and, especially, processed meat is to practice moderation. Meat still contains beneficial proteins and vitamins, and can be part of a healthy, balanced diet. Frankie Phillips, spokesperson for the British Dietetic Association, told the BBC, "The general message is it's OK to eat some red meat but perhaps to look at ways of increasing the amount of plant-based foods.” We should try to decrease the amount of red and processed meats in our diets and instead increase our intake of vegetables and legumes, such as lentils, beans, and chickpeas.