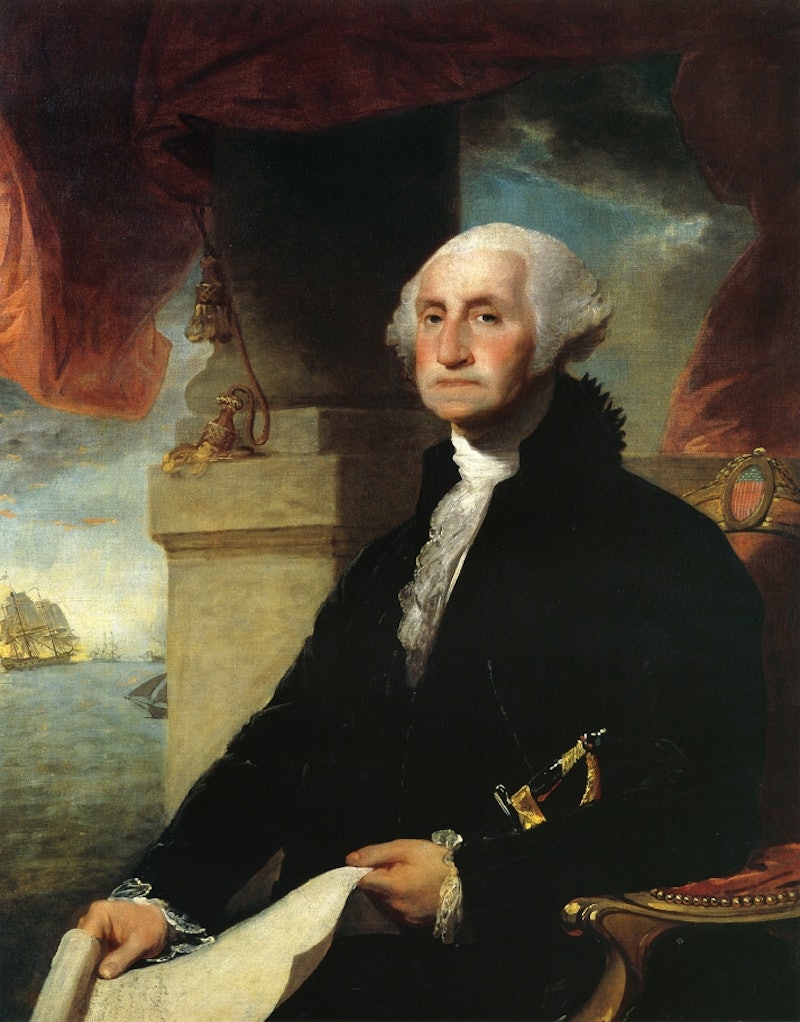 On the days leading up to Halloween, people get a little spook-crazed. Maybe it's a mix of the over-programming of horror movies on TV, the barrage of ghost stories linked in our news feeds and the overall mischief of season, but there's definitely an increase in scary "sightings" around this time of year. In a perfect example of said creepy October observations, Imgur user Mahurtma posted a photo of a shadow on his wall that looks a whole lot like George Washington's ghost.

It's sort of like how during the holiday season any rom com will do — Meg Ryan and Tom Hanks don't even need to be in it — we're just desperate to get in the spirit. Our whole outlook is tinted with mistletoe-green glasses, every interaction is charming. Every argument is banter. Every run-in is serendipitous. In October, we're on high alert for scaries. Any shadow is a ghost and any ghost is famous.

And of course, because everyone's looking for a good ghost story, the internet gets pretty excited about every reported shadow. So in the case of Washington's potential ghost, believers far outweighed the naysayers. Before long, other users joined in with some photoshopped edits of the photo that make it easier to see the "face". With the skills and software kids today have, it's hard to trust a photo. In reality there's probably a few apps that help create visuals that resemble ghosts. It's probably as easy as a few taps of a screen. So have we become to skilled to not be skeptical of footage that's allegedly recorded and un-doctored?

It seems like during the other months of the year, we're more likely to raise an eyebrow and put effort into disproving seemingly unbelievable spooky stories. But a week out from Halloween and we're taking whatever spooks we can get. Here are a few other famous people who have been said to make ghostly appearances:

The Hollywood Roosevelt Hotel is said to be the home of Marilyn Monroe's ghost. The actress spent a lot of time at the hotel in her prime. Both workers and guests of the hotel have reported sightings of her reflection in a full length mirror. I have to imagine though that most LA residents who saw a stylish, busty blonde staring back at them in the mirror would think they were just having a good hair day and go on with their day.

Paul McCartney is haunted by the ghost of his former friend and bandmate, John Lennon. He's spoken about it openly for years. He claims John has made multiple appearances at the recording studio, making his presence known with electrical interferences. Yoko Ono has has also sworn by the sighting of John's ghost at The Dakota — the place where he was infamously shot. Other guests of the Dakota have claimed to see John walking around the lobby or sitting at the piano.

The famous Citizen Kane director is said to regularly visit a bakery in L.A. that was once the home of Ma Maison, a trendy restaurant in the 1980s. Workers and patrons of the bakery have reported sightings of the director clad in all black, smoking a cigar and drinking a whiskey in the back of the room.