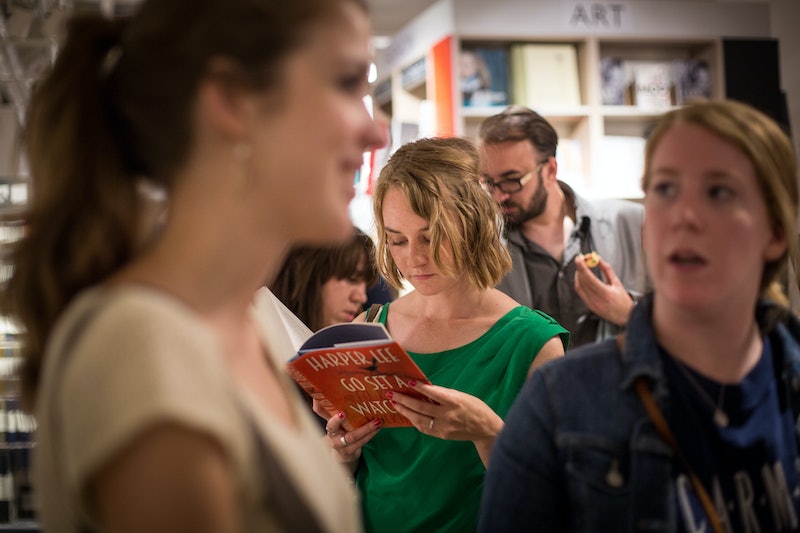 People have been bemoaning the downfall of reading in America for a long time now, and although a lot of the worry seems to be overblown, it's still not unfounded. According to a new Pew Research Survey, slightly fewer Americans are reading today than have been in years past. Interestingly, though, women and young adults are the ones most likely to be readers. So, it also might be time to re-evaluate some of our other assumptions about literary culture in America.

The Pew Research Survey provides a lot of interesting information about reading in America. First, the bad news: 28 percent of Americans have apparently not read a book in any format during the past year. Who are these people? I have no idea. But apparently there are a lot of them. That number has also gone up slightly — last year, only 24 percent of Americans could say the same.

But, on the bright side, a clear majority of Americans — more than seven in 10 — still read at least one book every year. And the numbers are higher among young people, women, and educated Americans. According to the survey, 77 percent of women have read at least one book in the past year as opposed to only 67 percent of men. Additionally 80 percent of people between the ages of 18 and 29 and 90 percent of college graduates have read a book in the past year. And as someone who fits into all three of those categories, I guess that sounds about right.

And not only are more women, young people, and college grads reading, we're also reading more. The average woman read an average of 14 books last year to men's nine. College grads read even more (an average of 17), while young adults' reading is about average, reading about 11 books a year on average. So not only are more women and young people reading, they're also reading a decent number of books.

Considering the number of young people reading — especially since most people between 18 and 29 presumably aren't doing so for school anymore — it seems likely that, if these people keep up their reading habit, reading isn't going to become an outdated pastime in the US any time soon. So while we shouldn't get too complacent, it seems the that the assumption that reading is going to fade away to nothing in the face of more modern forms of entertainment is inaccurate. Sure, reading has to compete with film and television and video games nowadays, but it still seems to be holding its own pretty well.

And this research also calls into question our assumptions about what literary culture in the U.S. really is like. Traditionally, reading as a cultural force has been associated and largely controlled by wealthy, white men middle aged or older. But it seems that really, reading today is mostly something young people and women do (though it also appears white people are still somewhat more likely to have read a book in the past year). So it might be time to change our assumptions about who reads in America, about who books are really for, and about who controls literary culture.