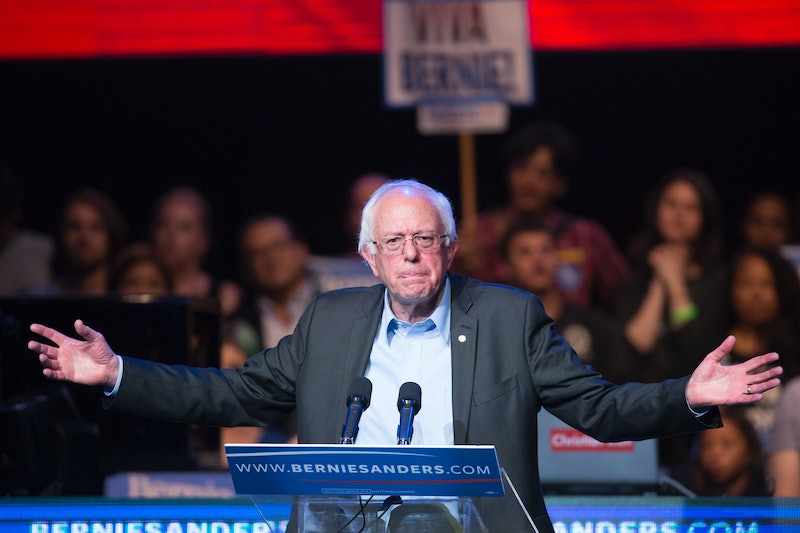 Let me preface this by saying choosing a presidential candidate based in any way, shape, or form on their looks is not a sound decision-making policy. I've learned the hard way such a superficial approach rarely works, considering my history of rooting for football teams based on the attractiveness of their ... jerseys. Having said that, the new Instagram account MenWhoBern is making me feel some type of way about my pre-determined backing of presidential candidate Bernie Sanders.

In a brilliant ploy to raise awareness for Hillary Clinton's biggest democratic opposition, MenWhoBern, which is unoffiliated with Sanders' official campaign, celebrates the sexy dudes who'll be marking their ballots in favor of the Bern come election day. And, well, you might be so inclined to as well whilst you peruse picture after picture of good looking guys who presumably support racial equality, gender parity, tuition reform, a living wage, women's rights, LGBTQ equality, health care reform, and a fair and humane immigration policy, to list a few of Sanders' presidential platforms.

According to the recently minted Instagram account, MenWhoBern chronicles "hot guys into Bernie Sanders." Yeah, we can dig those politics. After all, in addition to their obviously appealing exteriors, these do-gooding dudes are empowering young people to consider the presidential candidacy and use their wherewithal to vote. The MenWhoBern are as impassioned as they are attractive, which is a win-win in my book.

The fact of the matter is Bernie Sanders is kind of a big deal to many young voters, thanks to his position on popular issues among Millennials — think climate change, gay marriage, and, yes, marijuana (ol' Bern has fessed up to toking a time or two back in the day, and is uncomfortable with the broader implications of the war on quote-unquote recreational drugs). And while Sanders' young supporters are not overwhelmingly male, the young men who do support the Democrat are particularly outspoken about the virtues of their favorite candidate. They're so pronounced, in fact, that they've collectively been dubbed the Broletariat by the media. Or, singularly, the Berniebro.

So, without further ado, here are a few pics of supporters from Sanders' young male demographic who just so happen to be easy on the eyes, too. If you weren't feeling the Bern before, this should do the trick — if not politically, then definitely physically. What I'm trying to say is, Is it getting hot in here, or is it just these guys?

Obviously this account is all in good fun. But if you've been waffling over which candidate to cast your vote for, these slogan slinging members of the Broletariat should serve as good motivation. Because, even if it isn't the Bern, who doesn't want to find a candidate to believe in so wholly they'll happily rock a t-shirt emblazoned with a silhouette of said politico's hair?

More like this
13 Selfie Instagram Caption Ideas That Exude Main Character Energy
By Jessica Booth and Emma Carey
How To Use Instagram Story Highlights So Everyone Sees Your Fave Stories
By Brandi Neal and Emma Carey
25 Things I've Reduced My Life To, In Addition To WFH In My PJs
By Ginny Hogan
How To Change Your Twitter Handle
By Emma Carey
Get Even More From Bustle — Sign Up For The Newsletter