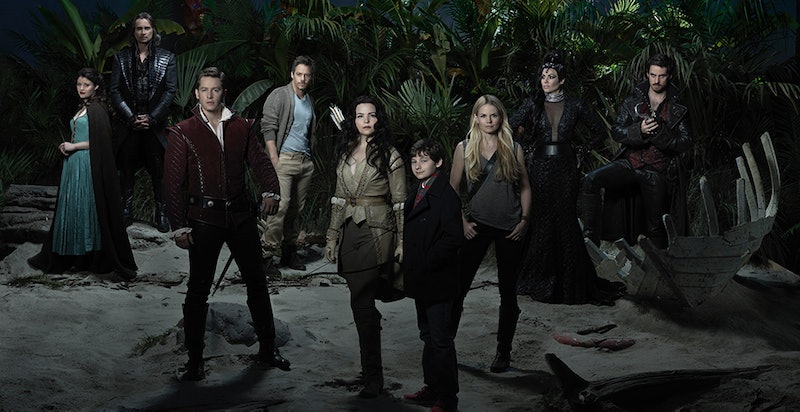 Anyone who religiously tunes into ABC on Sundays at 8 p.m. knows that the Once Upon A Time family tree is crazy. Eddy Kitsis and Adam Horowitz, the creators and head writers of the show, never fail to find a new way to connect the characters and draw out dramatic tension from old and new relationships. And clearly they're doing something right — the show is still doing well after five seasons.

The central theme of the show is family — when you strip away the magic and the fairytales, there's the nuclear family that is constantly growing and changing. Emma's journey to find, connect with, and protect her family is her driving motivation throughout the series and part of the reason that journey is so compelling is because the fans have been able to follow it all the way from the beginning. With all the twists and turns throughout the seasons, the audience has come to love Emma's family as much as Emma has.

The interconnectedness of the characters would seem totally unrealistic and overreaching on another show, in a less fantastical world, but the suspension of disbelief required for the fairytale premise means the audience accepts the familial relationships happily. Family relationships up the stakes and adds a whole other layer of tension, especially with the insane backstories that all the characters have. It gives tangible bonds between different stories and worlds and ties many of the characters together in interesting and revealing ways.

But all those intertwined family relationships mean that there are some very bizarre connections between various characters. Henry Mills sits at the center of a really complicated family tree — here are the 10 weirdest relationships from the show that prove it.

1. Regina is Henry's Mom... And His Step-Great-Grandmother

In the Enchanted Forest, Regina used to be married to Snow's dad, Henry's great-grandfather. Little did she know that she would be adopting Snow's grandson one day in a magical twist of fate. That also technically means that Henry and Snow are siblings. Sorry I just blew your mind.

2. Henry's Mom's Boyfriend Used To Sleep With His Grandmother

Henry's paternal grandmother, Milah, betrayed her husband Rumplestiltskin and left him for everyone's favorite guyliner wearing pirate. Weirdly, though, that means that Hook has had his way with both Henry's grandmother and his mom. Gross.

In Season 3, Snow's dabbling in the dark side results in Cora's untimely death. But honestly, it's probably a good thing — Cora was arguably the most evil villain to ever enter Storybrooke. I don't need her messing with my precious cinnamon rolls.

4. Confused About All Of Henry's Grandparents? There Are Seven Of Them

5. And He Has At Least 17 Great-Grandparents

6. Regina And Zelena Are Half-Sisters AND Eskimo Sisters

Classic girl-pulls-revenge-plot-on-her-half-sister-by-impersonating-her-true-love's-dead-wife-and-impregnating-herself triangle. Not weird at all.

7. There Are A LOT Of Eskimo Siblings

Like most dramas, there's a decent amount of sex going on in Storybrooke. But the intricate nature of the character's relationships means that everyone has slept with each other, at least by extension. Emma and Regina, Hook and Rumple, Hook and Neil are all connected via mutual relationships.

8. Henry's Mother And Grandmother Are About The Same Age

Regina's first curse really screwed up the whole aging thing. We know Emma was 28 years old when she first came to Storybrooke, and though it's never explicitly stated, Snow was about the same age when Emma was born.

Peter Pan, formerly known as Malcolm in the Enchanted Forest, is Henry's dad's dad's dad, but it didn't stop his homicidal rage when Pan finds out that Henry has the heart of the truest believer.

10. Henry's Moms Might Be In Love With Each Other

Depending on whether or not you ship Swan Queen, Henry's moms are totally in love with each other (personally, I used to be anti-SQ, but Season 5 is definitely making me rethink my life). It would probably make Henry's life a lot less confusing if Emma and Regina got together — if Emma marries Hook and Regina marries Robin, Henry's family tree will get even more complicated.

Part of what makes Once Upon A Time so much fun to watch is the unique and complex nature of the relationships in Storybrooke. And even if things get weird and confusing sometimes, the fans loves the characters and the characters love each other.