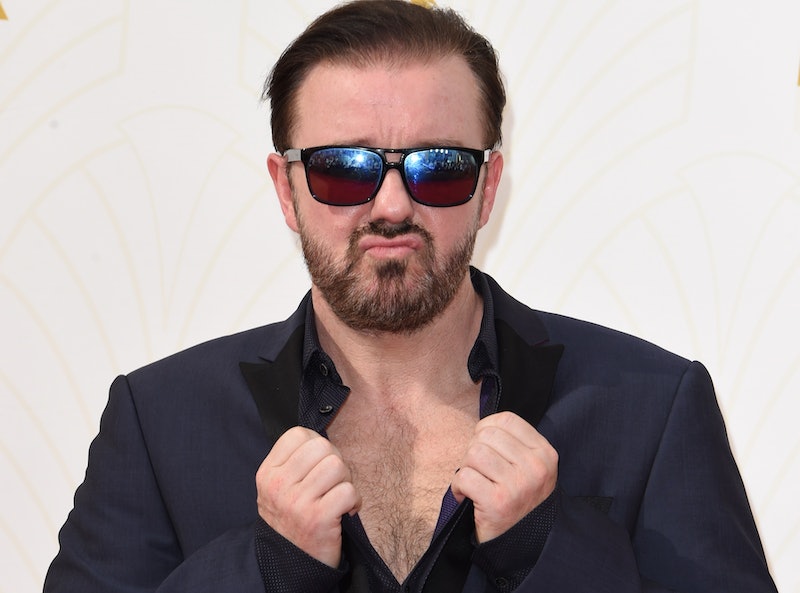 It's that time of year again. Awards season is approaching, and with it comes a whole bunch of questions. Who will be nominated? Who will be snubbed? And, perhaps most importantly, who will host? We now know the answer to the last question when it comes to the Golden Globes. According to reports, Ricky Gervais will host the Golden Globes in 2016, a job title that he held for three consecutive years from 2010 to 2012. After being co-hosted by Amy Poehler and Tina Fey for the past three years, the January 10 show will once again be infused with British flair. (They do say that fourth time's the charm, right?)

While the actor may change things up in terms of jokes and routine, his style never does — even if it's one that is often at the expense of Hollywood heavyweights. Though Gervais' jokes are on them, his jokes often have them laughing alongside him. Of course, this laughter can sometimes be more of uncomfortable teetering — as during this dig he made at some of the, umm, "enhanced" members of the Golden Globes audience in 2010:

Looking at all the wonderful faces here today reminds me of the great work that’s been done this year… by cosmetic surgeons.

Gervais is the master of snark, and doesn't let a singular person in Hollywood get away with anything. (Once during his time as Golden Globes host he referred to Bruce Willis as "Ashton Kutcher's dad." Another time he stated that he could out drink any man at the awards show, unless that man was Mel Gibson.) For some it's a refreshing way to poke fun at an awards show that tends to celebrate the highbrow. For others (like, say Mel Gibson) it's a little less fun.

Gervais pushes the envelope with his comedy, and that sometimes includes jokes that put the audience on edge. (No one really wants to hear a Holocaust joke at the Golden Globes, or, like, ever.) But perhaps that's what we need to expect from Gervais: his humor comes with a "sorry not sorry" attitude.

If you have thin skin, Gervais may not be your preferred Golden Globes host. But if you can stomach his sharp tongue and crass jokes, then you might be on the floor laughing throughout the entire three hour show.