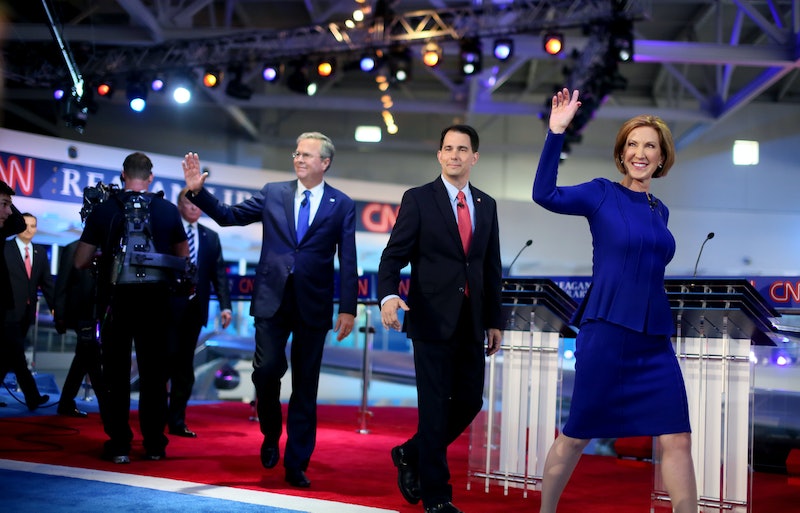 Yes, yes, we're about to embark on the third Republican debate, but don't fault me for already looking ahead to the next showdown. Trust me when I say that when the fourth GOP debate arrives on Nov. 10, it's going to be a must-watch. It will be the first debate occurring within a year of the general election, and you also might see the return of a widely-missed voice in the debate sphere.

Come November, viewers will once again be treated to a Fox-hosted GOP debate. But this time, it'll be Fox Business Network running the show. FBN is collaborating with The Wall Street Journal to put on the event at the Milwaukee Theatre in Milwaukee, Wisconsin. Similarly to the latest debate's emphasis on the economy, the FBN/WSJ forum will focus on "jobs, taxes, and the general health of the economy," as well as other domestic and international policies.

There's no word yet on the general rules, who exactly will be participating, or who will even be moderating the event. But there's a small glimmer of hope that we might get another face-off between Donald Trump and Megyn Kelly. Since their tit-for-tat during the first GOP debate electrified viewers, people have been clamoring for Kelly to return to the stage. Chances were you'd have to wait until January, when Fox News was scheduled to host the Republican candidates again. But maybe, just maybe, since it's all in the Fox family, the Trump-Kelly reunion will happen sooner than you think.

Given the packed schedule — there are nine GOP showdowns planned — it's understandable if you have some debate fatigue. But compared to 2012, which saw almost 20 debates between Republican candidates alone, the schedule this time around is pretty light by comparison. So if you miss the CNBC debate, don't worry, because the next one is right around the corner — less than two weeks away.