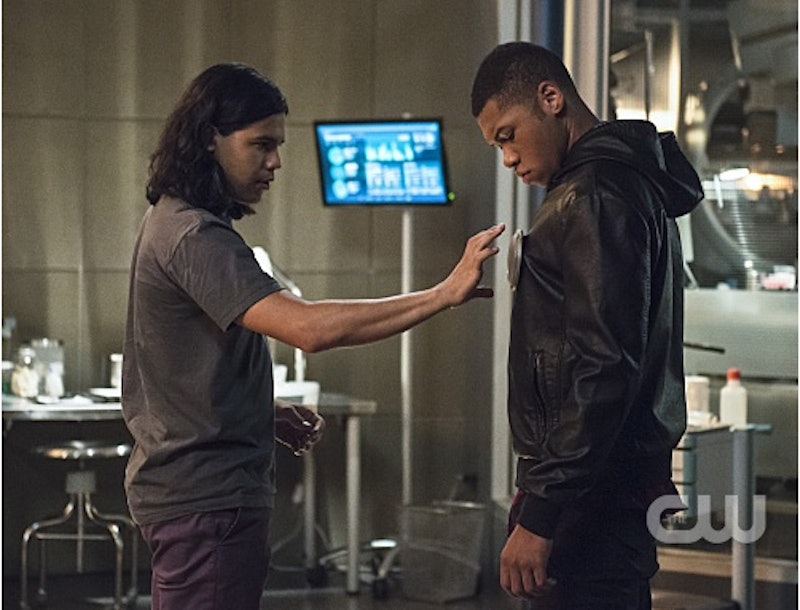 TV audiences aren't all that used to different actors taking up the mantle of existing characters (I'm still dealing with the introduction of the "new" Aunt Viv on Fresh Prince), but comic book identities shift all the time. Jane Foster becomes Lady Thor; Kamala Khan becomes Ms. Marvel; etc. The Flash is experimenting with a further nod to its comic origins by re-defining its version of Firestorm. Until Tuesday's episode of The Flash, Firestorm has been one part Victor Garber's Dr. Martin Stein and one part Robbie Amell's Ronnie Raymond. But Ronnie died a hero's death saving Central City from the fallout of the Singularity; and from the looks of the scientist last week, Dr. Stein isn't doing well in his absence. Enter Jefferson "Jax" Jackson on The Flash .

Jackson is played by Franz Drameh, and the Attack The Block actor made an appearance in an early Legends Of Tomorrow trailer that has since been taken down, according to CinemaBlend. So Jackson needn't worry too much about the S.T.A.R. Labs Firestorm deliberation process. Entertainment Weekly reported that the team will be choosing between Jackson and Henry Hewitt, another new character, for the gig. Hewitt's name will be familiar to comic fans since he's the alter-ego of Tokamak, a popular Firestorm nemesis.

So, what's Jackson like, and how will he be different from Ronnie? Executive Producer Andrew Kreisberg told a press gathering (as reported by Zap2It) that The Flash is reaching back into Ronnie's comic roots to flesh out this new character.

In the comic books Ronnie was like a dumb jock. Obviously, Robbie and the character that we created for our Ronnie was obviously an engineer and was more mature and has a girlfriend. He was more of an adult. The idea of a second Firestorm being somebody who was just in his early 20s and somebody who was radically different from [Robbie’s] Firestorm....There’s a lot more room for comedy with the Firestorm character than we’ve seen before.

That's not to say that Jackson doesn't have what it takes to link up with Stein. He was a bright student and a stand-out athlete, but one of the team's main reasons for choosing him is that he's not desperate for metahuman abilities. “Jax does not want to be a hero," Drameh told TVLine. "He does not want these powers." Whether it's this reluctance or Jackson's lack of scientific experience compared to Ronnie's that causes it, Drameh promises some fun friction between Stein and his new associate. "There’s a lot of back and forth, and it’s a love-hate relationship between the two," he said.

Meanwhile, Amell is throwing his support behind his replacement on Instagram while also promising that he'll eventually return to the Flash universe. "Well, you’re never really dead when you’re on The Flash," Kreisberg told Entertainment Weekly after the season premiere. He also assured fans that Ronnie's apparent death opened up "rich storytelling" opportunities for both The Flash and Legends Of Tomorrow.

Will the two non-Stein halves of Firestorm ever meet? We'll have to keep watching The Flash and its new spinoff to find out.