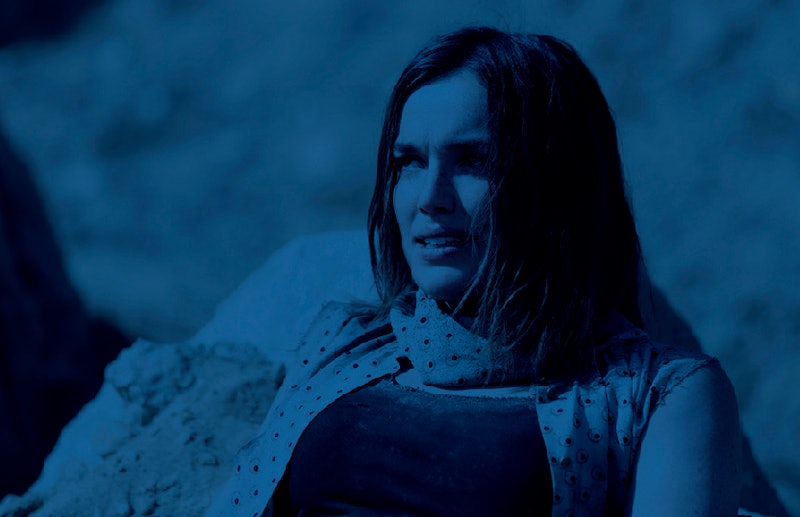 Maybe it's just me, but if I had just been rescued from six terror-filled months on a desolate and alien planet, the last plans I'd be making would be to get myself back there. But that's just what Jemma Simmons is planning on Agents Of S.H.I.E.L.D. The Season 2 finale shocked fans with that stressful cliffhanger; Simmons was absorbed by the inscrutable Kree monolith. Her time in the blue-tinted terrain that Fitz rescued her from is still a mystery, both to her fellow agents and to the audience. Tuesday's episode "4,722 Hours" (which translates to 197 days and roughly 6.5 months) will throw back to Simmons' accidental exile, and fill fans in on what trauma she endured to cause her crippling PTSD. And the episode will almost certainly divulge the reason why Simmons wants to return to the planet that she finally escaped. Could it be that whatever threatened Simmons on the alien planet followed her back to her own?

I don't believe that Simmons was alone on that planet; it would make for a tedious episode if she had been. But were her co-habitators friends or foes? Human or alien? In the second episode of the season, the show flashed back to a research group who came across the monolith in 1800s. The promo stills that ABC has released for the show suggest that Simmons finds evidence of these past visitors. But are they still alive?

My theory is that Simmons wants to go back to the planet to eradicate something or someone that's threatening her life on Earth as well. In an interview with Entertainment Weekly, actress Elizabeth Henstridge acknowledged the possibility of a multi-dimensional danger.

She’s definitely afraid of that. That will for sure feature. Now that she’s back, it’s not like, “I’m fine, moving on!” It will have a huge impact on the rest of the season. Psychologically, she’s petrified that she’s not safe.

Granted, this answer could be referring only to Simmons' ingrained fear and the PTSD that Henstridge and the show have been portraying so responsibly. But her insistence on going back hints at a more immediate problem. It's a problem that Agents Of S.H.I.E.L.D. has kept admirably under wraps. This preview clip shows Simmons with only her scientific log of her experience and a cell phone photo of Fitz (sob) for company.

Simmons isn't the same person she was when the monolith claimed her, but she still retains her compassion and strength. Though her ordeal should be over and done with, I can see her putting herself back in danger to keep her friends — and especially Fitz — safe. In last week's episode, she expressed her intention to go back in alone, which can either mean that she refuses to risk any other lives or that she spent those 6.5 months learning how to destroy whatever evil lives there and now just needs to finish the job.

Whatever her challenges, Simmons is getting her spotlight episode in "4,722 Hours," and her fate may echo through the rest of the Marvel universe.