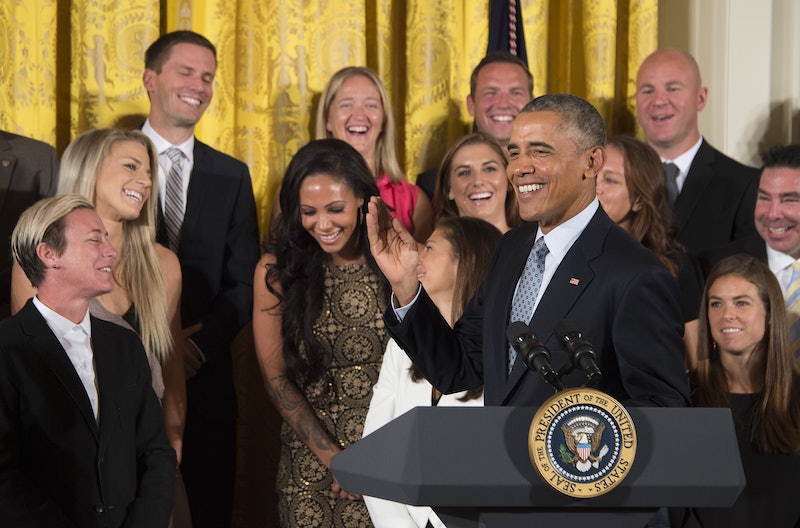 President Obama met with the U.S. Women's National Soccer Team Tuesday, and he offered some powerful words of encouragement for female athletes. Obama praised the team, who won the FIFA Women's World Cup in July, for proving the haters wrong. (OK, he didn't exactly say that, but he did praise them for dispelling stereotypes about female athletes.) The team completely dominated the World Cup, beating Japan 5-2 and marking the WNT's first World Cup win since 1999. "This team taught all of America’s children that 'playing like a girl' means you're a badass," Obama said, before adding that the team "inspired girls to dream bigger — and by the way, inspired millions of boys to look at girls differently, which is just as important."

The president was introduced by 13-year-old Massachusetts resident Ayla Ludlow, who wrote Obama a letter about promoting women in sports. Ludlow said that during the World Cup, her brother told her that "boys are so much better than girls at soccer." Rather than offering a catty retort, Ludlow decided to take things to the president himself. In her letter to Obama, Ludlow wrote, "I hate the fact that boy's sports always get the most attention ... it makes me mad that people do not treat girls equally." But after the WNT's win, and her presentation at the press conference, Obama told Ludlow that she "just had a national audience letting him [her brother] know what's what."

Using the term "badass" wasn't the only surprise Obama had in store for Tuesday's press conference, though. During his speech, Obama mentioned that after the World Cup win, an endeavoring Wikipedia user had updated Team USA midfielder Carli Lloyd's page on the site, claiming that she was the United States president. Lloyd was one of the team's stars in the tournament, scoring a hat trick during the World Cup final and leading the team to victory. Obama said that Lloyd "knows more about being president than some of the folks who are running," joking that she should run for the office.

If you've ever been told that you play sports "like a girl," or any variation on that ridiculous stereotype, well, now you've got the president on your side. The next time you hear someone tell you or your children that boys are better than girls at sports, you can remind them of the U.S. Women's National Team's World Cup victory, and share Obama's words of support with them. Playing "like a girl" is nothing to be ashamed of. If the Women's National Team is any indication, it's something pretty darn special. If someone tells you that you play like a girl, thank them for the badass compliment.