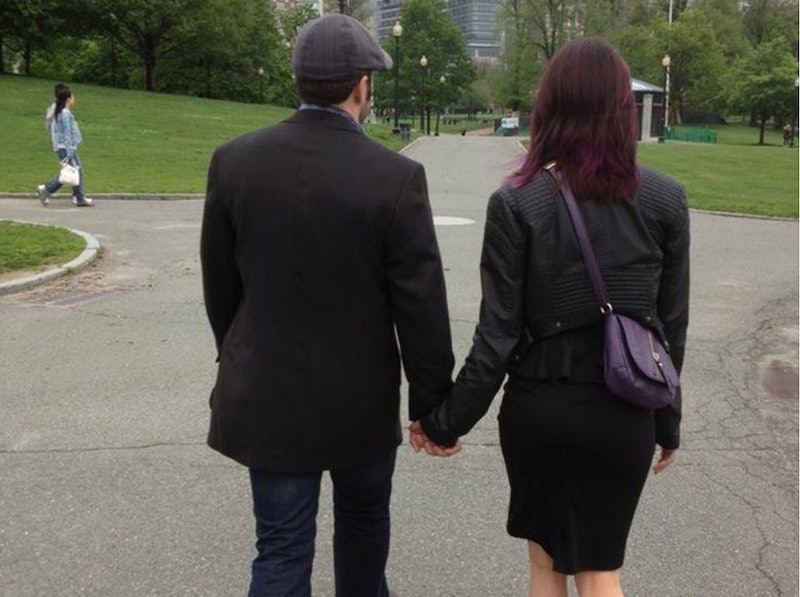 My love story starts like so many do — I met my husband in a bar. He was the owner of the bar and I was an alcoholic and drug addict, deep in my active addiction. It was a match made in heaven, because the alcohol and drugs were free and his need to be at the bar at all times worked out well for my drinking schedule. We over-imbibed together until the party ended — his bar closed, I lost my job, and we didn’t have much left.

Four years later, we’re both sober, successful, and married — to each other. We’re the unicorn of addict relationships, because so much of recovery advice involves being willing to give up unhealthy relationships and unhealthy people in order to get sober. And as I watch the tabloids report stories of Khloe Kardashian and Lamar Odom’s reconciliation in light of his alleged overdose, or Kourtney Kardashian and Scott Disick’s struggles due to his alleged drug use, I reflect on my own relationship and how we got to the place we’re in today in the face of such a dire situation.

When I tell women just entering recovery, who are desperate to hold onto their miserable, codependent relationship, that I’m married to the man I was dating and using with when I first got sober, I give them a little bit of hope. I am a beacon of light, an example that proves it is possible for two people to beat the odds and get sober together. But there is a difference between getting sober together and getting sober simultaneously. And we did the latter.

One day in October or November 2011, my then-partner, now-husband asked me to leave our apartment and not come back. He’d had enough of my partying. He was sick of worrying about me when I went out at night, and tired of the empty promises to never do it again. I was confused and sad because I thought we were doing this thing together, but I left anyway. A few days later, sitting on my friend’s couch after a two-day bender, something inside of me shifted and I recognized that it was time to get help.

I called him up. “I’m ready to go to treatment,” I said, half-lying. I didn’t really want to get sober. But I recognized that what I was doing was not sustainable. I also wanted to come home. And I knew that, unless I agreed to do something drastic, he wasn’t going to let me. Reluctantly, he let me back in and helped me make the necessary calls to find myself a bed in a treatment center. I went, hoping to save our relationship.

After three weeks in treatment, I realized that maybe I actually wanted to be sober. I also realized that I needed to have sober people around me if I had any shot at actually staying sober. I called my partner and let him know where I was at. I told him that if he didn’t want to stop drinking, that was perfectly OK. But I knew I couldn’t be with someone who was drinking if I was not. So I gave him a week to decide what he wanted to do, and if he decided that he didn’t want to give up the booze, I would walk away with no hard feelings.

It was the first time I’d ever made a decision for myself. I’d always been terrified of being alone, and relationships were another thing I used, like drugs and alcohol, to fill the void I felt inside me. But I was surprised when he called a week later to tell me that he was going to give sobriety a shot. He found a sponsor to work with him while I stayed in rehab.

While in rehab, one of the staff members said something that still stays with me to this day. He asked if I knew the difference between love and obsession. Then he explained, “Love means that your ultimate concern is for that that is beloved. Obsessed is ‘it hurts when you’re not here.’” It’s a barometer I still use today when trying to make decisions about my relationship.

When I told my partner I was going to stay three extra months in treatment, he said, “OK.” And when I told him that, instead of coming home, I was going to move into a sober house after rehab, he said, “OK,” even though he missed me. It was in that moment that I realized that really he loved me; his concern was for my well-being over his feelings.

My relationships had always been codependent. My partner and I had never spent more than three nights apart after we started dating, until I went away to treatment. I was using people to seek validation to make me feel better about myself, so I wouldn’t have to feel the emptiness inside me. I had to learn different ways to have a relationship. So when the staff at the treatment center told me I could only talk to him once a week, I said OK. When they said I couldn’t see him while I was in rehab, I said OK. When the sober house said I had to wait 30 days after moving in to see him, I said OK. When they said we could see each other twice per week after that, I said OK.

Anything you put before your recovery, you will lose.

It’s a familiar saying in recovery circles and it’s meant to stress the need to put your recovery from drugs and alcohol before everything else in your life, including jobs, friendships, and romantic relationships. I didn’t know what it meant until I tried to put it into practice. What it means is, if you’re not solid in your recovery and in a good place with yourself, you will not be able to maintain all of the other aspects of a functional life.

What the two of us had to learn over the ten months we spent apart was how to be OK with ourselves. We had to learn how to live sober lives, who we were as sober people. And what the people around us taught us was that we had to be sober for ourselves before we could be partners to someone else. They also taught us that we couldn’t save each other; the only person we were responsible for saving was ourselves.

Those ten months were hard and we almost didn’t make it. I was so afraid to lose him that I put everything else so far before him that I ceased to make him a priority. I prepared myself for a life without him by creating that life preemptively. And as a result, he almost broke up with me. But I wasn’t the same girl he’d started dating. When he sat me down and told me he was done, that I was selfishly putting everything else before him, I didn’t get defensive. I didn’t try to argue. I told him he was right, and that if he wanted to give me a chance, I wanted to try to do better.

A few months later, I moved back into our apartment. One month later, he proposed. Six months after that, we were married. Of all the gin joints in the world, I’m so happy I walked into his. But what many people don’t realize about dating an addict is that the trick to having a healthy relationship with one is not staying by their side no matter what — it’s being willing to walk away if it’s what’s best.

It was only once I became willing to give up my relationship in order to be sober that it turned out I didn’t have to. Clinging to something in the hopes of saving it is a surefire way to destroy it. If you love something, set it free. If it’s meant to be, it will come back. I promise.