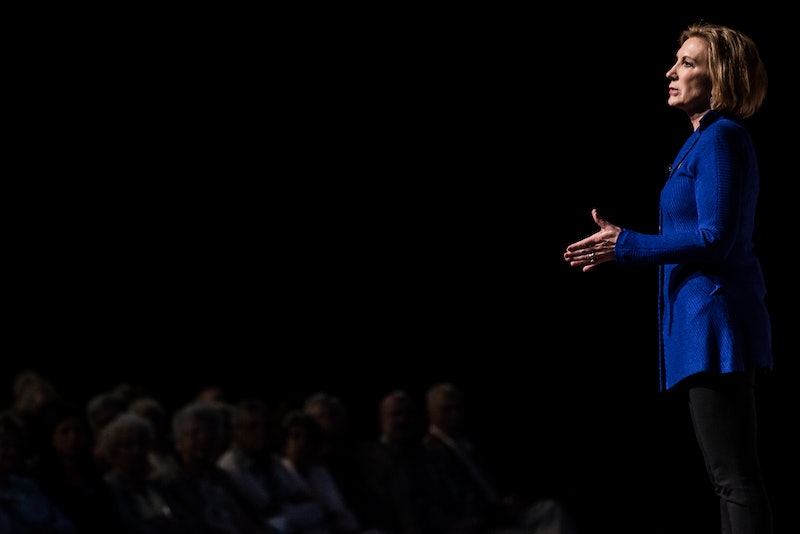 Since a fiery debate performance helped her single-handedly win the second GOP debate in mid-September, Carly Fiorina seems to have lost most of her edge, slowly dropping in the polls as rivals Ben Carson and Marco Rubio rocket through the ranks and eclipse her fame. No one's quite sure what happened — and whether Fiorina clumsily missed a shining PR opportunity while busying herself with fundraising, or whether she simply wasn't equipped to handle the sudden popularity. But one thing is certain: The next GOP debate will determine whether Fiorina moves forward to the next round of primary activity or falls to the wayside. Worse still, with business and finance media giant CNBC hosting the night's debate festivities, Fiorina's HP record will seriously hurt her — especially now that the public has had time to dissect it — leaving the former CEO struggling to hold on to whatever poll numbers she has left.

Fiorina's tenure at tech behemoth Hewlett-Packard has been a sore subject for the presidential candidate before. At the September GOP debate, rival and billionaire real estate tycoon Donald Trump, understanding perfectly well that the HP stint was Fiorina's Achilles heel, pounced at the opportunity to take down the former CEO by drudging up her failed record with the company from 1999 to 2005.

"The company is a disaster and continues to be a disaster," Trump admonished during the Sept. 16 debate. "When Carly says the revenues went up, that's because she bought Compaq — it was a terrible deal, and it really led to the destruction of the company."

The claim to which Trump was referring was Fiorina's favorite tagline about "doubling" the size and growth rate of HP, which she's used on numerous occasions to bolster her otherwise highly criticized stint at the tech company. Earlier in the evening, Fiorina had pulled out the growth rate remark while laundry listing her accomplishments as a businesswoman.

In a similar comment to Meet the Press host Chuck Todd earlier in the year, Fiorina claimed that she had taken the "growth rate from 2 percent to 9 percent" and had "tripled the rate of innovation to 11 patents a day." Only a few days earlier, Fiorina told Yahoo! News' Katie Couric that she had "quadrupled the cash flow" as well.

But according to many analysts and financial experts, Fiorina wasn't quite telling the whole story. While it was true that HP doubled in size between the years of 1999 and 2005, the majority of that was attributed to a widely criticized merger between HP and computer company Compaq. While the acquisition did allow for HP to begin a venture into the world of PCs, laptops, and everything in between, the merger itself was badly mishandled, leading the company to layoff some 30,000 employees due to redundancy (a statistic glaringly published at the now infamous CarlyFiorina.org, a URL which Fiorina's team seemingly failed to register prior to her presidential announcement and which was subsequently purchased by a cyber-squatter).

In addition to the layoffs, Fiorina's claim that the HP growth rate had risen from 2 percent to 9 percent under her leadership was deemed "cherry picking" by FactCheck.org. Explained the Annenberg Public Policy Center-founded nonprofit in a May 2015 post:

Fiorina's "doubled" the company claim is often followed by the claim that "we took the growth rate from 2 percent to 9 percent." That, too, is a reference to revenue, but it isn't calculated by comparing 1999 to 2005. Instead, her super PAC says the statistic compares the second quarter of 1999 to all of 2005. If we use the same parameters as Fiorina's "doubled" claim, revenue growth went from 7.5 percent in 1999 to 8.5 percent in 2005. But 2005's revenue growth was only 6 percent on a constant currency basis, which is an adjustment due to foreign currency fluctuations.

Fiorina's claim to fame — that she was able to raise the growth rate 7 percentage points while at the HP helm — also inaccurately portrayed her time at the top as incrementally successful, with the company gradually gaining more ground until she was unfairly ousted in 2005. That couldn't be further from the truth. In fact, based on a year by year, currency adjusted viewpoint, HP's growth rate actually tanked in 2001 at negative 3 percent, but jumped to 23 percent in 2003 after the Compaq merger. In 2004, that number dropped once more to under 5 percent before it leveled out in 2006 (post-Fiorina).

So while revenue and size at HP did jump significantly during Fiorina's tenure as CEO, her claims of a successful run were anything but. "Most executives would likely not use the phrasing 'doubled the size of the company' to describe their performance if the increase was all or mostly due to an acquisition," Stephen Morrissette, business professor at the University of Chicago, told PolitiFact in May. What's more, even with the jump in revenue, the company's stock value still managed to plummet miserably by 41.3 percent, according to a 2011 report by Reuters in.

Rephrasing and retelling the HP story in such romantic terms as "leading in every product category and every market segment," the way Fiorina did at the last debate, may not be the wisest choice this time around, certainly with the lion's share of Wall Street tuning in and the moderators themselves able to see past the glimmer of political spin.

If Fiorina wants to get ahead of the competition — and, more importantly, her own bad habit of embellishing reality — in order to stay in the 2016 race, she needs to accept the burden that is her terrible reign at HP and start referring to it as a learning experience rather than something of which she seems to be stubbornly proud.

More like this
How To Support Gun Control Reform Right Now
By Morgan Brinlee and Carolyn Steber
What Is Barack Obama’s Net Worth? He Makes *Way* More Now As An Ex-President
By Hugh McIntyre
How To Protect Your Digital Privacy If You Need An Abortion Post Roe v. Wade
By Kaitlyn Wylde
The Church Of Scotland Votes To Allow Same-Sex Marriages
By Sam Ramsden
Get Even More From Bustle — Sign Up For The Newsletter