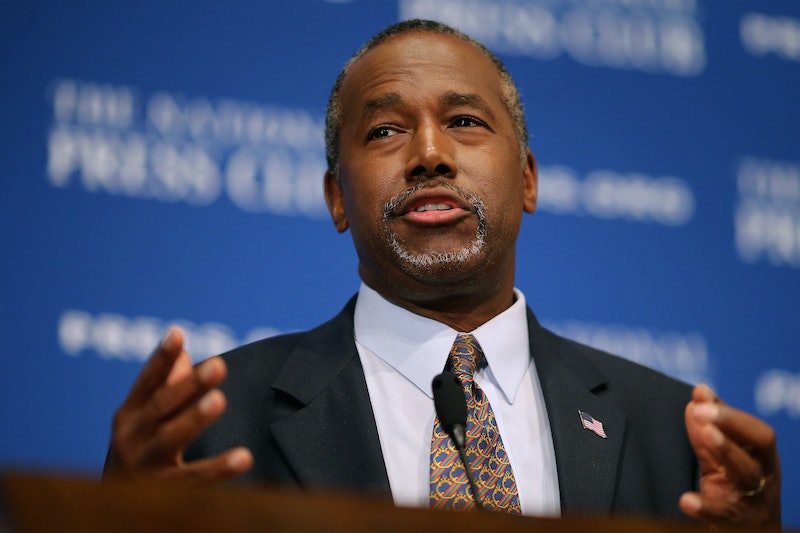 A lot has been said about the surgeon-turned-politician's origin story, but many Americans might not be familiar with Ben Carson's mother, Sonya Carson, who has been a driving force in her son's life, career, and campaign. As incredible as his poverty to politics story might be, it's almost nothing without the woman who made it possible. And her own story is incredibly powerful.

Raised in Tennessee, Carson's mother was one of 24 siblings, and was bouncing around foster homes and living in poverty when she met Robert Carson. In the 1940s, Carson, who was 28, married 13-year-old Sonya and pulled her out of poverty, but it wasn't a happy story. After moving to Detroit and having their two sons, Curtis and Benjamin, the marriage fell apart. Ben Carson was eight, and his brother, Curtis, was 10 when their parents divorced after Sonya Carson discovered that their father had a second family, according to The Washington Post.

From there, life became more difficult for Carson, his older brother, and his mother. She worked two to three jobs at a time in order to support her sons, and according to Carson, would sometimes leave their small apartment at 5 a.m to go to work and not come home until midnight. Having dropped out of school in the third grade, Carson's mother was practically illiterate, according to POLITICO. But as a result she became passionate about her children's education, challenging and inspiring them to dream bigger.

After Carson came home from school with poor grades, his mother instituted a strict change in the household. She limited her sons' TV time, and wouldn't let them go outside to play until schoolwork was done. And she started encouraging them to read two books a week, write book reports on them, and hand them in to her. Her dedication to their education saw substantial results — both boys would go on to graduate college. "Nobody was born to be a failure," she told the Detroit Free Press in 1988.

Throughout his career, Carson has always taken inspiration from his mother, and since announcing his candidacy for president, has incorporated his mother's stories into many of his stump speeches. But the day before announcing, Carson found out that his mother — who had been diagnosed with Alzheimer's in 2011 — was dying.

As a result, he postponed a rally in order to be able to visit her, and spoke of her often during the early days of the campaign. But despite the serious nature of her disease, she managed to pull through — something that CNN's Jake Tapper learned the hard way when he gave Carson his condolences in July.

"She actually sprang back," Carson told the embarrassed host. "It looked like she was on her death bed. We all went down to say our final goodbyes. Everybody started praying, and she sprang back."

Carson's humble beginnings, hard work, and gentle nature have resonated among voters, launching him into a leading position in the polls. But as he's quick to point out, none of it would have been possible without his mother's guiding force and unparalleled dedication to his future.