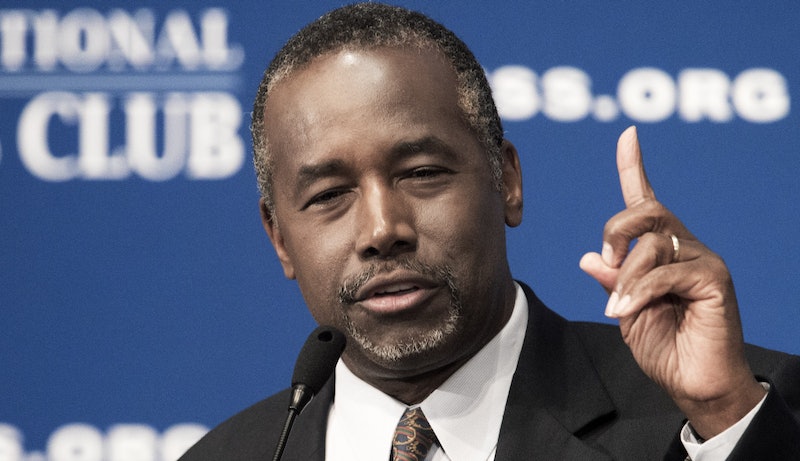 Ben Carson talks a lot about his mother, Sonya. She has been a focus of his campaign since the very beginning thanks to her strong personality and her significant impact on Carson's life. In fact, he postponed his first big rally following his campaign kick-off announcement to be by her side as she grew increasingly sick from Alzheimer's. Carson's father, on the other hand, is a completely different story. Ben Carson chooses not to talk about his father, probably because he wasn't much of a father to talk about.

We know a lot about Carson's childhood, thanks to his speeches, his books and even the TV movie inspired by his life story. We know significantly less about his father. Robert Solomon Carson, with whom Ben shares a middle name, wasn't a part of Ben's life for very long. Ben's parents divorced when he was just eight years old, and Ben, his mother, and his older brother went to live in a group home in Detroit's inner city. Carson is now known for his humble beginnings: He grew up in a poor, single-parent household and managed to become a successful doctor and political figure. In this way, it's like Carson's lack of a strong father figure has defined his story just as much as having one could have.

Both Robert and Sonya Carson's families came from rural Georgia, but they met while living in Tennessee. They got married when she was just 13 years old; he was 28. Early in their marriage, Robert served in the military. When they moved to Detroit, where Ben would later be born and grow up, Robert got a job at a Cadillac factory. He also served as a minister; some sources call him a Baptist minister, while others refer to him as a Seventh-day Adventist minister. Seventh-day Adventist would make sense, as Ben has been a baptized Seventh-day Adventist since childhood.

Carson's parents divorced when he was eight years old because his mother found out that his father was having an affair. More than that, he had a whole second family. Sonya took Ben and his brother, Curtis, to live in a group home, while their father went on to live with his second family. That's pretty much where the story of Carson's father — at least as it relates to Ben Carson himself — seems to end. He has said that he was raised by a single mother. His business manager and friend, Armstrong Williams, told The Washington Post in May, "Dr. Carson never had a father."

Carson definitely had a father, but Robert wasn't much of a dad to his sons. That hasn't stopped Carson from finding success in more ways than one. He has now surpassed Republican front-runner Donald Trump in polls in both Iowa and the nation overall.