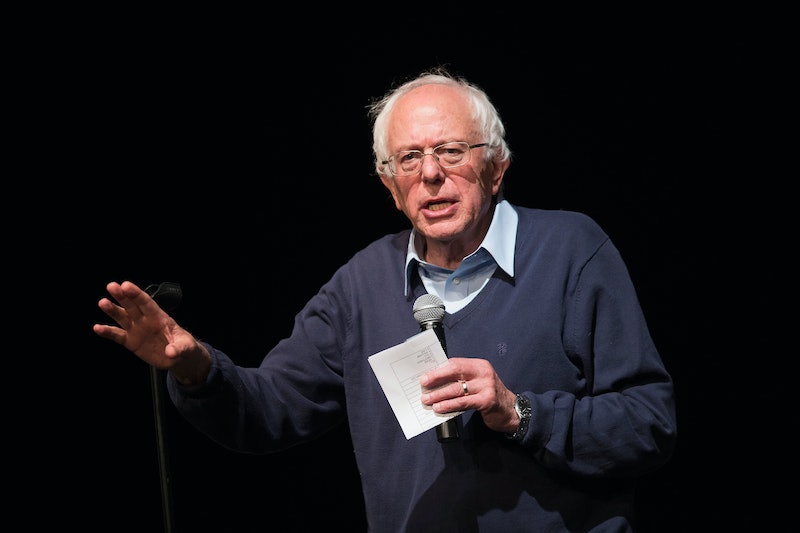 Democratic presidential candidate (and Hillary Clinton's biggest nightmare) Bernie Sanders is many things, but reserved is not one of them. Following in his recent tradition of live-tweeting the Republican primary showings, Sanders' GOP debate tweets Wednesday evening were anything but self-contained, with the dry-humored Vermont senator employing his arsenal of knowledge on taxation, income and wealth inequality, and the minimum wage to dispute several popular Republican claims. If you didn't have access to cable to watch the CNBC-broadcast GOP showdown, Sanders' Twitter account, though largely quiet throughout the evening, provided more than enough backhanded partisan quibbling to satisfy your debate cravings.

"It is an embarrassment," wrote Sanders early in the evening, "that we have a major political party that rejects the overwhelming science on climate change." The brief tweet provided the perfect jumping-off point to start the night's festivities.

Sanders has made both the Republican and Democratic debates compelling. While most pundits agreed that Clinton won the first Democratic debate in mid-October, it was Sanders who stole the show. "Mr. Sanders was mentioned 407,000 times online on Tuesday night — more mentions than the rest of the debate participants combined," wrote The Wall Street Journal the morning after the CNN/Facebook sponsored event. "[...] Moreover, several of ... Sanders’s tweets topped Twitter’s list as the most-retweeted moments of the debate."

That sort of response seemed to be a recurring theme. According to analysts, Sanders managed to take home the social media prize at the second GOP debate as well, just weeks earlier. Headlines like The Hill's "Bernie Sanders was GOP debate's real winner" coupled with The Huffington Post's simple exclamation of "Yasssss, Bernie" proved that Sanders had what it took to bring down the house, no matter who happened to be under the hot lights of the debate stage.

"It wasn't even close," CrowdTangle CEO Brandon Silverman said in a comment to The Hill, remarking on the number of Facebook mentions about the Vermont senator during the September GOP debate.

This time around, it seems that Sanders was more than happy to renew that same energetic sentiment, tweeting a few short and sweet gems as the night progressed. "Which one will the billionaire class choose?" tweeted Sanders midway through the GOP showdown, posting a photo of the Republican field. "#TheirMoneyTheirVote."

After the explosive debate festivities had finally started to wind down, Sanders took one last opportunity to tweet his own frustration with the evening's theme of family values. "A lot of Republican candidates talk about family values," he quipped. "What they are saying [instead] is that no woman should have the right to control her own body."