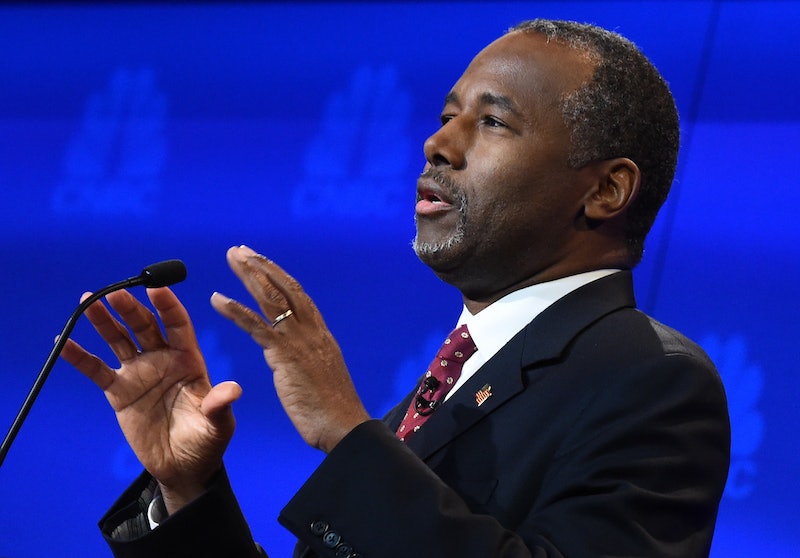 It's safe to say that Ben Carson had a lot riding on this debate. The stakes were high for all the remaining Republican candidates, but Carson surged past longtime frontrunner Donald Trump in the polls a day before the debate, so this was an opportunity for him to solidify his position at the top, or else fall from primary voters' good graces. Throughout the debate, he remained his usual quiet, unenergized self, speaking softly and rarely out of turn. Fortunately for him, Carson's closing statement could be enough to keep him in the lead after Wednesday night.

On Tuesday, a new CBS News / New York Times poll ranked Carson squarely at the top among the nation's Republican primary voters. Carson brought in 26 percent of the vote, whereas Trump only had the support of 22 percent. The gap between the two candidates falls within the poll's margin of error, but it's still significant in that it's the first time since the summer that Trump hasn't topped a national poll. Just a day earlier, on Monday, a Monmouth University poll found that Carson had nearly twice as much support among Iowa voters as Trump. In that ever-important state, Carson had the support of 32 percent of Republican primary voters (or caucus-ers, I guess), whereas Trump registered just 18 percent.

Carson's lead has largely been attributed to his Christian values, which resonate with conservative Iowans and — clearly — those elsewhere. His closing statements only marginally reflected those same values, but they did touch on something Trump has popularized in recent months: avoiding political correctness. As a result, it will be interesting to see how they, and voters in general, respond to his performance on the debate stage.

Carson started his closing statements very politely. "I want to thank all of my colleagues for being civil," he said. "I just also want to thank the audience for being attentive."

Then he segued into a brief discussion of values, saying that it's important to fight to protect those values even if that fight means sacrificing some politeness. "This is what I'm finding throughout America: People are waking up because it is us who will determine the fate of this great nation," he said. He continued by saying that Americans shouldn't give up their traditional values "for the sake of political correctness."

If this argument sounds familiar, that's because it should. Since the very onset of his campaign, Trump has smashed political correctness into a million little pieces, never to be glued back together again as far as this election is concerned. Only, Trump's PC argument and Carson's PC argument are very different. Trump is using his campaign against political correctness to call out politicians for talking too much and doing too little — or at least, that's how it seems. Carson, on the other hand, has always taken a more values-centric approach to his campaign, and in his closing statements at the debate, he echoed this call for values. He argued that political correctness is threatening the traditional values of Republican voters.

After a subdued, perhaps even lackluster debate performance, this values-oriented call to action might have saved Carson's spot on top of the polls. Many think it's his evangelical Christianity which has resonated so well with conservative primary voters, particularly those in Iowa. Trump's campaign against political correctness has clearly resonated with voters, too, helping to propel him to the top until this week. In this way, Carson could be trying to leverage the power of the values approach and the power of the anti-PC approach simultaneously. Only time will tell if it continues to pay off for him.