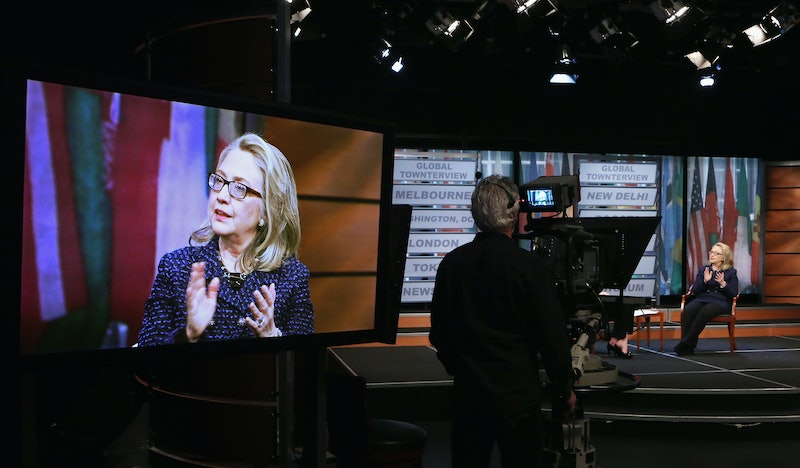 Hillary Clinton has been making her late-night rounds as of late, and she finally stopped by "the Cathedral of Colbert" (as she put it) during a Tuesday stop on The Late Show With Stephen Colbert. As she waded through talking points about big banks to jokes about parachute pants, Clinton also revealed her favorite TV shows, presenting a list that honestly isn't too surprising, given her political resumé.

Clinton's Colbert appearance came a day after she celebrated her 68th birthday, and she told the late-night host that she and husband Bill decided to hold off on campaign events and instead binge-watch their favorite shows. (Politicians, they're just like us!) Clinton named House Of Cards, Madam Secretary, and The Good Wife as some of her fave shows — not too shocking, but man, Clinton really never gets a break from political drama even in her free time. (I bet she was a fan of The West Wing in the '90s.)

The Democratic frontrunner even admitted to Colbert she was "a little" jealous that Madeleine Albright, the first female U.S. secretary of state in history, had a recent cameo on the Téa Leoni-led series. (Though, I wouldn't be surprised if Hillz made a surprise appearance sometime soon. After all, the show is arguably loosely based on Clinton's life.)

Of all the shows, I'm surprised Clinton named the Netflix series House Of Cards, because there are certainly plenty of theories about which ambitious political couple the Underwoods draw inspiration from. A night to Netflix and chill with Hillary? Count me in.