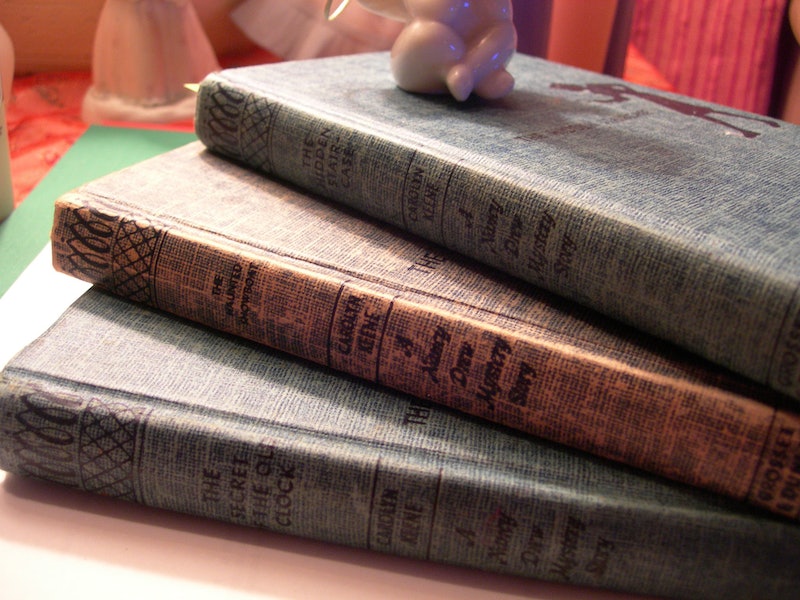 Being a true book nerd means not only having a never-ending "to be read" pile and a bookish tote bag. It also means knowing your favorite author's life story, being able to recite passages at the drop of a hat, and knowing the little-known facts about popular books.

I'm not just talking about the fact that Catch-22 was originally titled Catch-18 or how it took Dr. Seuss a year and a half to write The Cat in the Hat, though those are the kinds of facts that you might want to keep in mind for Jeopardy. I'm referring to the kinds of facts you stumble across at 2 in the morning when you're furiously Googling facts about a book you just finished. (That's a normal thing to do, right?) Well, if you're a true book-lover, it totally is — and so is reading author biographies, critical essays, and all the footnotes, because that is where you find all the juiciest facts.

Ready to know more about the books on your shelves other than their titles and authors? Here are eight little-known facts about popular books, because you're a book nerd and knowing them is part of the job description. Don't worry, there won't be a quiz after this.

Lolita Was Written On Notecards

While some authors write their first drafts by hand and others type them, Vladamir Nabokav wrote the first draft of his famous Lolita on notecards. Not only did these tiny cards include the entire text of the novel, but he also used the them to make edits, take notes, and even doodle.

The Title Pride And Prejudice Came From Another Novel

The phrase "pride and prejudice" is repeated several times at the end of Fanny Burney's novel Cecilia , and it is believed that's where Jane Austen got the title for her most popular book. Austen counted Burney among her favorite authors, so it would make sense she was inspired and influenced by the writer.

You definitely know Fifty Shades of Grey was a runaway bestseller, but did you know it was actually the best-selling book of all time in the U.K.? If you can believe it, the Twilight fan fiction novel even beat out monster hits like Harry Potter and the Sorcerer's Stone. And we all thought J.K. Rowling took second place to no one.

The "T" At The End Of Voldermort Is Silent

Speaking of Rowling, come on, admit it: How long were you saying Voldermort's name wrong? Harry Potter fans, myself included, are hardcore, but even a lot of us didn't know that the "t" at the end of Voldermort is silent. Mind. Blown.

Not only was Cat's Cradle one of Kurt Vonnegut's best and most beloved novels, but it also helped him earn his Mmaster's from the University of Chicago. The author never finished his degree while enrolled in school from 1945 to 1947, but the faculty granted Vonnegut his degree based on the "anthropological value" of his novel.

While F. Scott Fitzgerald did not make up the word "wicked", his novel This Side of Paradise was the first to use the phrase as slang to mean "good." As a girl from Boston who uses wicked in just about every sentence, I have to say: Thank you, Fitzgerald.

Vanity Fair Originally Had A Subtitle.

A lot of books have subtitles that are forgotten or completely unknown to readers, including the subtitle for Vanity Fair . William Thackeray's original title was "A Novel Without a Hero," which later was added as a subtitle to Vanity Fair. Now even its role as a subtitle has been wiped out..

Carolyn Keene Did Not Actually Write The Nancy Drew Books

Carolyn Keene is the author that appears on the cover of the Nancy Drew books, but she is not a real person. Instead, Keene is a pseudonym standing in for several writers who worked as ghostwriters on the series created by the publishing icon Edward L. Stratemeyer. So, when you told people she was your favorite author as a kid, you were pretty much lying. The more you know.