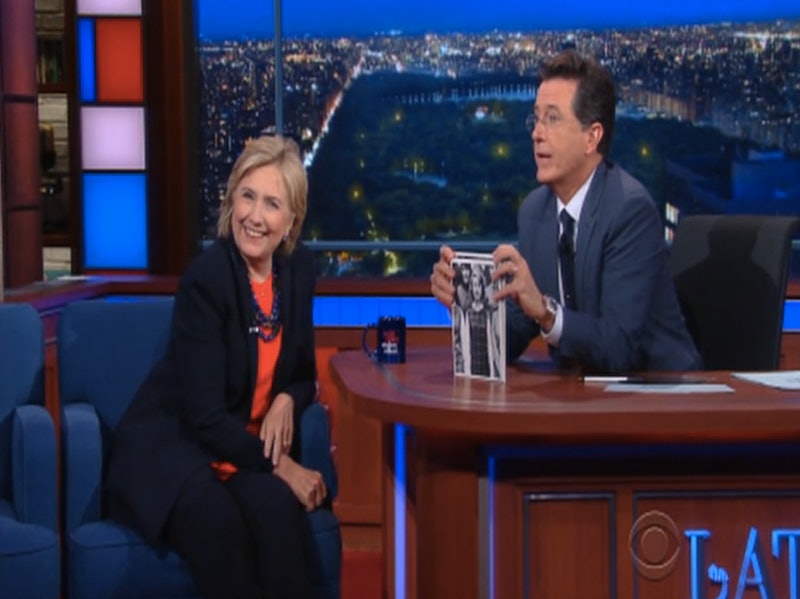 We're in the final week before a momentous Halloween weekend. We've got an asteroid "barely" missing Earth and a daylight saving switch that'll give us an extra hour to party it up come All Hallow's Eve. If you're still scrambling for ideas on what to wear in celebration of this one-of-a-kind weekend, Stephen Colbert ran some Hillary Clinton Halloween costumes by the Democratic presidential candidate herself during Tuesday's Late Show.

On Monday, the day of Clinton's 68th birthday, her campaign website released several DIY costumes that included clear step-by-step instructions on how to honor your favorite Hillary moments. On The Late Show, the Democrat laughed as she told Colbert her team had actually gone ahead with the costume how-tos without her knowledge, but the frontrunner clearly enjoyed herself as Colbert showed some of her most memorable outfits throughout her career. From her early days as a wide-eyed high school student to her time in the White House as first lady, these Clinton-sanctioned ideas would be the perfect way to cap your Halloween festivities.

If anything, "you'll really scare your Republican friends," like Colbert joked. Or "you'll scare your Democratic friends," as Clinton said. Regardless, check out these easy costumes that have Hill's official stamp of approval.

"If anybody left in America has a Peter Pan collar white shirt and a plaid jumper, you can do that," Clinton said. This one elicited some "awws" from the crowd.

The dress, made by Donna Karan, is actually called a "cold shoulder" dress. (So, no, this is not meant to rub Republicans the wrong way.) You can get it by cutting out the shoulders of a black turtleneck.

No Hillary Clinton costume list would be complete with the famous Texts from Hillary meme.

But if you're looking for something a little more modern, Colbert has his own idea on what would make the perfect costume. "If you really want to achieve the costume, the Hillary Clinton costume this Halloween, people can just go to the party dressed up any way they want, but they have to stay for 11 hours," Colbert joked in reference to Clinton's monster 11-hour testimony in front of the Benghazi investigation committee last Thursday. But with your costume set, the real question is what Hillary will be for Halloween.