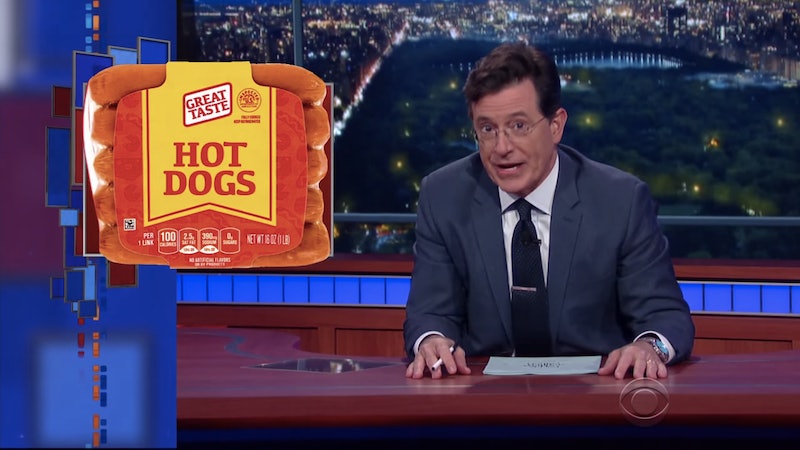 On Monday the World Health Organization released a report clearly stating that processed meats cause cancer, and that red meats "probably" cause cancer. The report started two frenzies on social media: #FreeBacon, which bacon lovers used to defend the breakfast favorite, and #SmugVegetarian, which vegetarians were using to tell meat lovers "I told you so." Well, Stephen Colbert weighed in on the WHO report on The Late Show with Stephen Colbert Tuesday night. He said that, yes, meat is bad for you, but vegetarians really can't be so smug.

Specifically, the WHO report said that processed meats, including hot dogs, bacon, and sausages, can cause colorectal cancer in humans, and that red meat is likely part of the cause. The report resulted from the International Agency for Research on Cancer examining 800 studies when 22 health experts met earlier in October. But people didn't take the news well. Because people, Americans especially, love meat, many responded by saying "everything causes cancer" or with the hashtag #FreeBacon.

Colbert, a meat lover who is aware of the foodstuff's health effects, had to take up the topic. He began the brilliant segment "The Meatocalypse Has Arrived" by saying that viewers of Monday night's segment know that he has often talked about hot dogs, "a subject near and dear to my heart, because they're lodged in my arteries." He then cited a shocking investigation on hot dogs, which found that two percent of them contain human DNA.

"That's right, some of those hot dogs are actually hot Dougs," Colbert said, and pointed out that the report didn't specify the source of the DNA. "Is it hair? Is it fingernails? Did a lonely factory worker stay late one night and seduce a sausage casing machine? Could your pig in a blanket have a bun in the oven? Who knows."

Colbert said that this study will change "America's love affair" with the all-beef frank, "or should I say the all-Frank beef?" And that's not the only bad news for meat lovers. The WHO report put processed meats in the same danger category for cancer as smoking cigarettes and asbestos. Colbert was not happy with this:

What? Smoked meats are as dangerous as asbestos? Well, there goes my plan to insulate my attic with jerky. How can cured meat be bad for you? It's got the word "cure" right in the name.

Colbert said the news is really sad for him because he lives for meat. He said he has a two-pound slab of bacon in his freezer at all times because he is the father of two teenage boys, who he can only get out of bed by frying bacon in the morning:

That's what the kids call, 'Wakin' and bacon.' That smell — you get that stuff sizzling in the pan — it makes them float down to the kitchen like a cartoon hobo following the smell waves from a pie. You think they're going to come running down the stairs to the scent of me washing kale?

Colbert said that, according to "doctors," he can't smoke and he can't eat bacon. But, thankfully, he then said that doctors haven't said anything about smoking bacon. So he pulled out a plate of bacon, stuffed a pipe full of the stuff, and lit it up on screen.

That is actually better than I imagined. But be careful; the pork these days is actually so much stronger than it was in the '60s.

Colbert said that what ticked him off the most was people using the hashtag #SmugVegetarian, which he called redundant. He said that vegetarians got him, because yes, meat is bad for you. But he then said that he doesn't like to engage in the kind of Schadenfreude that vegetarians have been enjoying since the WHO's report:

That's why it brings me absolutely no joy to tell you that hot dog study I mentioned earlier also found that 10 percent of vegetarian hot dogs also contain meat. That's right! You know that time you thought you actually tasted something flavorful? That was the meat.

Colbert should start his own hashtag — #SmugStephen.