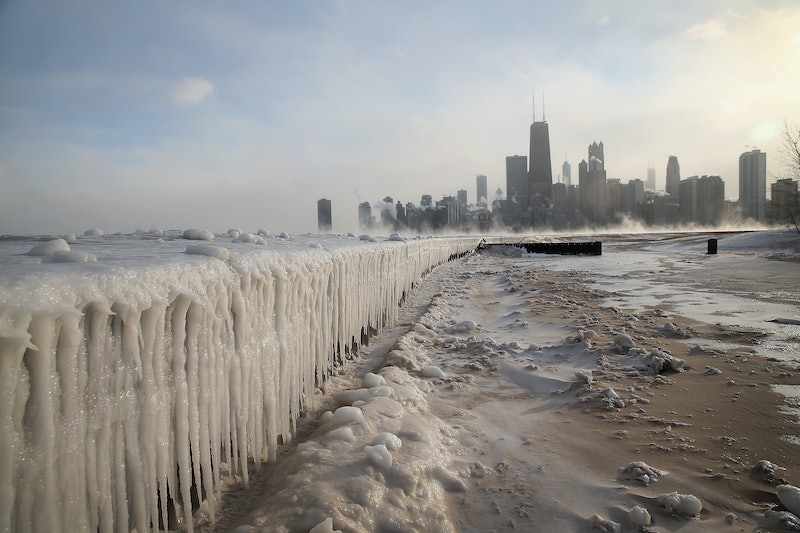 Weather update: it’s still cold. Still really freaking freezing. Across most of the United States, in fact, now that the weather phenomenon known as the polar vortex has hit the Northeast and South. The Midwest is experiencing its coldest temperatures in 20 years, and already, at least 15 people have died thanks to the freezing temperatures. Parts of America are colder than the South Pole, and Chicago’s new nickname is ‘Chiberia’, thanks to the National Weather Service’s hashtag. Fuel’s freezing at airports with icy tarmacs, delaying 3,577 flights and canceling 4,392 others. The only good news here is that this is already the beginning of the end: temperatures are expected to get closer to normal as soon as tomorrow.

It's all thanks to the East-bound polar vortex, which, by the way, is exactly what it sounds like: a whirling mass of air at the poles. It may be freezing out, but rather counter-intuitively, this cold burst likely has more than a little something to do with global warming.

So, what is the polar vortex? We're glad you asked, because we're about to nerd out: the polar vortex is basically a 100-mph whirlwind of really cold, dense air that typically lives up in the stratosphere at the North Pole (the South has one, too). Because the winds are spinning so fast, all the air inside the vortex is trapped. But we got unlucky this year — the winds slowed down, which meant that all that icy air spilled out, headed to the next layer down (the troposphere, where weather happens), and headed our way.

A lot of people are pointing to this cold snap (let's be real: deep freeze) as evidence that global warming isn't happening because, uh, global warming is hot, duh. But clearly they've never seen Day After Tomorrow, or the Daily Show, for that matter.

While conditions are not apocalyptic — I repeat, this is not a Jake Gyllenhaal situation — the winds up top get thrown off when they slow down. And the winds slow down when the air up in the stratosphere of the Arctic suddenly warms up. And of course, scientists believe that the warming-up has a little something to do with what heating phenomenon? You guessed it.

But climate change skeptics tend to confuse "weather" (which is right now) with "climate" (which is weather over time). Which might also explain why Fox's political editor is the one covering the weather today.

(No matter, ahem, that a study published in Public Understanding of Science showed that Fox continues to be one of the biggest drivers behind climate change denial in the U.S.).

Anyway, put down your bat, Mark, we're here for you. See, a little phenomenon happens up at the pole called "arctic amplification": polar regions tend to experience more warming more quickly than anywhere else. Right now, the Arctic is warming twice as fast as the rest of the globe, thanks to the melting sea ice. As it disappears, the sun's heat that was once reflected back up off the ice is now absorbed by the ocean. And when the ocean gets warmer, more ice melts (vicious cycle alert!).

Arctic amplification leads up to the second reason for why global warming might be driving this cold blast: with a warmer pole, the air becomes closer in temperature to North America. And a new theory that some scientists, such as Jennifer Francis at Rutger University's Institute of Marine and Coastal Sciences, subscribe to is that the jet stream is affected by these changes. (The fast-moving jet stream is a band of air above North America that creates a buffer zone between polar air and tropical air and essentially drives our weather.)

When there's less of a temperature difference between polar, air, and jet-stream air, the jet-stream slows down, starts to move north-south instead of east-west (per the norm) and gets stuck in patterns. It could explain our out-of-season weather these past couple years, our cold snap now, and the long-lasting cold (it's been almost two and a half weeks since the first ice storm barrage hit the east coast).

Dude, I think we can safely say it's here.