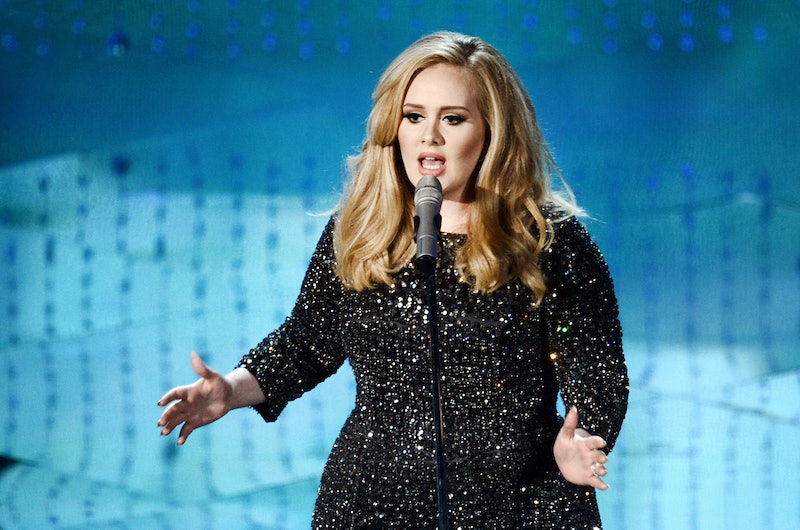 I know I speak for everyone when I say we're biting our nails waiting for Adele's newest album 25 to come out on Nov. 20, and wondering what we're supposed to do in the meantime. Well, I have an answer for you: listen to some of the best Adele remixes. It might feel like blasphemy or betrayal at first, since they aren't sweet sultry words coming directly from her mouth to our ears, but this is what happens when you go four years between albums! Harrumph.

And, anyway, the problem with Adele songs is that they're so low-key that they're not good for excitedly waiting around to. When I'm so pumped for something that I can't sit still, I don't want to be crooning into the mirror about it, I want to be jumping around at the club shaking my nerves out. So how to make Adele's songs high-energy enough to help me burn off my anxiety until 25 comes out? Well, by remixing them of course! People with musically-inclined brains much smarter than mine have taken on pretty much every song Adele has ever put out, god bless them, and added their own beats, synthesizers, and effects to take these songs to the next level. Or just a different level.

Check some of them out below.

You wouldn't think a beat that urgent would match with the message of "Someone Like You," but it oddly works, and will have your toe tapping in no time.

2. "Set Fire To The Rain" by Reggaesta

Can all of my favorite songs be remixed with reggae from now on? Cool, thanks.

3. "Melt My Heart To Stone" by Mick Boogie

Mick Boogie did an entire genius album of Adele remixes, from her album 19, called 1988, and I highly recommend all of it, but especially his take on "Melt My Heart To Stone."

ABSRDST uses repetition and a kind of stuttering quality to give "Chasing Pavements" a chill pool party vibe that will make your hand ache for a margarita.

And, if you're looking for a sultrier, sexier foundation, check out Ultimix's version of the same song, filled with drum lines that highlight Adele's incredible pipes without overshadowing them.

It takes a minute to get started, but, when Adele's big voice comes in to fill in the gaps left by the synthesizer, you'll be surprised at how well everything meshes. "Hometown Glory" has never been more dance-able.

The smoky feel of backrooms has been stripped away from this track from the James Bond film of the same name, but somehow it still has an aura of the spy franchise. I could hear it playing in the background of a European club that Daniel Craig had to visit for some reason and then take his shirt off.

I tried my best not to pick favorites, but Jamie XX's version of "Rolling in the Deep" got the best of me. He just makes it so catchy and modern that I can't stop playing it on loop.

So there you go, I've done my best to tide you over until the Kween herself returns with new material. Stay strong, my friends. Stay strong.