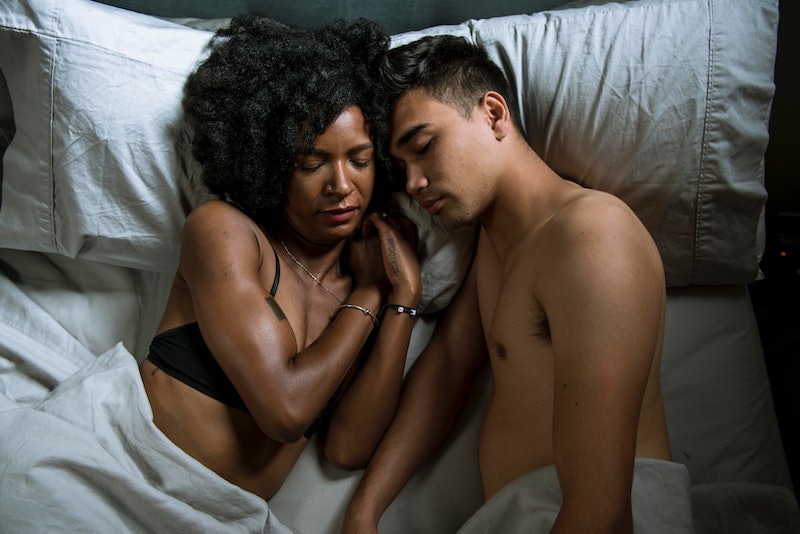 Considering all the people who exhort us to get as much sleep as possible, you'd think it was an all-curing panacea that could do no wrong. You'd be seriously incorrect. Too much sleep, it seems, is not any better for the body than too little — and it's been linked to a whole host of charming diseases that you definitely want to avoid as much as you can. So yes, the snooze button is your nemesis — for many reasons beyond getting to work on time.

Of course, getting too little sleep is definitely a massive health risk too — but precisely what amount of sleep you're meant to get is an individual thing. Most doctors recommend seven to eight hours per night, and distrust the nine-hours-a-night reasoning that was popular a few years ago (I remember being told in no uncertain terms to get no less than nine hours during my high school exams). And then there are the famous people who survive on four or five hours a night. Don't do that unless your name is Hilary Clinton.

So the next time you're tempted to sleep in beyond the normal eight hours on a long weekend, remember this list. It might prompt you to roll out of bed and go for a jog out of sheer terror.

1. You're More Likely To Become Diabetic

Diabetics habitually oversleep because they're more easily fatigued, due to their bodies' difficulty in converting glucose into energy. But it seems that it's not just cause and effect: diabetes might show up more often in people who oversleep because of underlying health conditions that link the two.

A study in Quebec found that people who slept more than eight hours a night were at risk of developing Type 2 diabetes — and were twice as likely to develop it than people who restricted themselves to seven or eight hours. Excessive tiredness can occur if you're suffering from either very high or very low blood sugar levels — both of which are an early indicator that you might develop diabetes.

2. You May Develop Coronary Heart Disease

It may be that having an unstable ticker just makes you sleep more, or that something about an extended sleep cycle and not enough rest within it makes your heart less able to take care of itself. Sleeping longer than the recommended 7-8 hours a night often means that the body isn't actually dipping into truly deep sleep at a regular rate — which means it actually isn't getting enough rest. Hence: tired heart.

3. You're Probably Going To Be More Tired

Sleeping for seven or eight hours indicates that your circadian rhythms — the natural "clock" of the body determining wakefulness and tiredness — is on track. If you're often sleeping more, it's likely that you're not actually getting all that much truly deep, restful sleep, and that your body's trying to get you to have more. Oversleepers often have messed-up circadian rhythms, and their bodies don't experience REM, truly restful sleep as often as they could — which explains why oversleeping often makes you feel utterly wretched instead of like a rested angel.

4. You'll Have A Higher Stroke Risk

A study in an edition of Neurology this year showed the results of a 10,000-strong study of oversleeping and stroke risk — and the results are not great for people who love breezing through alarms. Shockingly, the percentage of the population who sleep more than eight hours a night have a 46 percent higher chance of stroke than those who stuck to a more traditional sleep schedule. The problem is that they don't know why. It may be that the messed-up metabolism and neurochemistry of an over sleeper indicate that strokes are imminent — or something else. Stay tuned.

5. You're More Likely To Be Obese

This is a chicken-or-the-egg problem. Obesity may contribute to longer sleeping patterns because one of the problems with being obese is sleep difficulties, like sleep apnea — which will result in the body wanting longer time in bed. It's commonly noted that too little sleep upsets the brain and produces more cortisol, the hormone that prompts the body to retain fat — but it's looking increasingly likely that longer, less refreshing sleep may have a similar affect.

6. You May Experience More Headaches

This just seems unfair. Getting a blissful 12 hours and waking up to a head that feels split in half by an axe? What on earth is going on with that?

Turns out that oversleeping messes with the brain's neurochemistry in a way that makes it more likely to develop headaches. The disruption of your neural chemistry by excessive sleep may lead to lower serotonin, the brain chemical linked to mood — and to headaches. So not only are you more likely to be depressed, you're also likely to have a head-splitter.

7. You're More Likely To Have Depression

Oversleeping actually isn't a clear indicator that you're depressed — only 15 percent of all depressed people oversleep — but it does seem that oversleeping makes it more likely that you'll develop a form of depression in your life. Lethargy and the refusal to get out of bed are pretty powerful psychological influences on mood, which is why so many psychologists tell depressed patients to regulate their sleep as much as possible. And, obviously, there's the point we just discussed: oversleeping lowers your serotonin, which is likely to kill your mood.

8. You May Die Younger

Well, this is just depressing. Oversleeping not only acts as a big red flag for the development of all kinds of fun conditions; it's also an indicator that you may die early. Yes, leap out of bed immediately.

People who go beyond the normal limit of seven or eight hours a night have been shown to be significantly more likely to die at a relatively young age than those who sleep regularly. Researchers point out that that may be because oversleeping is also tied to mental health conditions and to poverty — which contribute seriously poorly to overall life expectancy. They're really cautious about linking oversleeping and early death specifically as cause and effect: it's more likely that health conditions associated with too much sleep tend to have high mortality rates. But it's worth keeping in mind next time you throw your alarm clock at the wall.