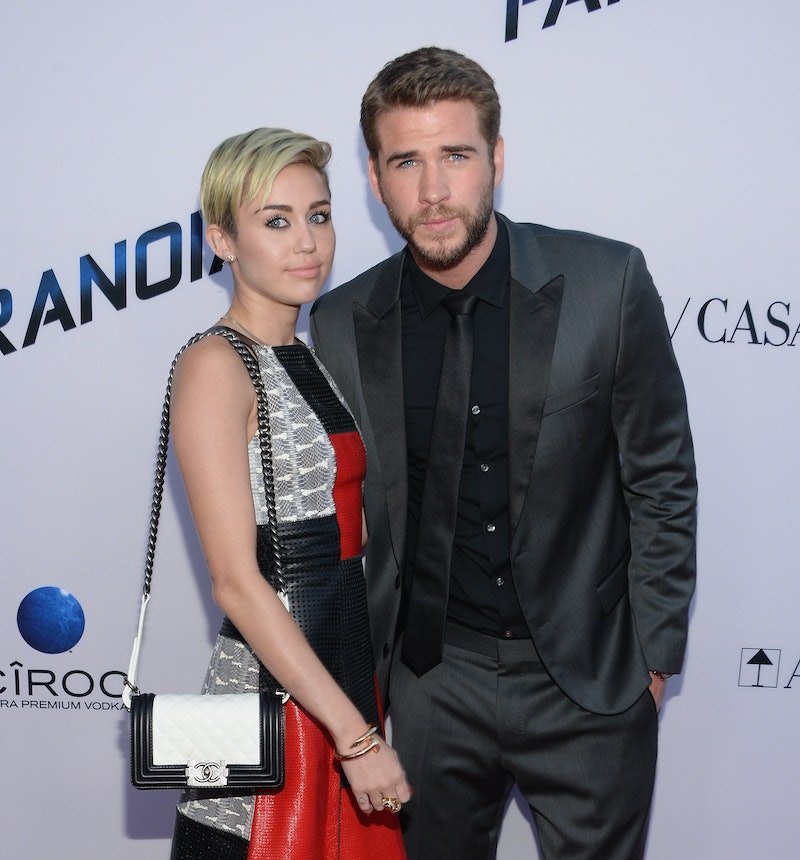 Liam Hemsworth is opening up about his former fiancée. And, as usual, the Hunger Games star has nothing but lovely things to say about her. In a recent interview with Men's Fitness, Liam Hemsworth talked not regretting his past relationship with Miley Cyrus in a classy move. Hemsworth said,

I mean, look — we were together five years, so I don't think those feelings will ever change. And that's good because that proves to me that it was real. It wasn't just a fling. It really was an important part of my life and always will be. She's a free spirit. I think she'll always surprise people with what she does, but she's not a malicious person in any way. She's a young girl who wants to do what she wants to do.

It's definitely worth applauding the Aussie actor for this quote about Cyrus. Not only is he providing a thoughtful and respectful perspective on the "We Can't Stop" performer and her personal and professional journey, he is also honoring what they shared together before ending their engagement in September 2013. But at this point it is somewhat unsurprising that the 25-year-old is still speaking positively about their relationship. There are so many Hemsworth and Cyrus quotes that prove the former loves still care about each other. Read on to see some of these quotes, and try not to believe in #ExGoals — because they just may have made them a thing over the past few years.

"Me and Liam are still so close and we love each other, and [the media makes] it like there is negativity," Cyrus said in an October 2015 interview with Elle UK.

On No Ill Will

"There's not much to say; there’s no bad blood there," Hemsworth said in an interview with Nylon Guys in September 2014.

On Still Having Love

"I'm extremely happy for all of her success," Hemsworth said in a November 2013 Extra interview.

On Making The Best Of It

"I’ve known this guy all that time and if it doesn’t work out I can still smile and love him and he can love me and that’s great, that’s the way to be. Life is too short," Cyrus said in an interview with U.K.-based Love magazine in February 2014.

"I don't think I realized what 19 truly is, and I got engaged at 19, and I definitely wouldn't change being engaged," Cyrus said in a December 2013 interview with Barbara Walters.

There are a lot of Hollywood breakups out there that end in an ugly way, with some stars dissing their former loves or throwing shade at them publicly and some stars simply refusing to ever mention their former relationship, as if it never even happened. Honestly, it is a breath of fresh air to see that Cyrus and Hemsworth have both been able to put their past behind them in a healthy and respectful way.