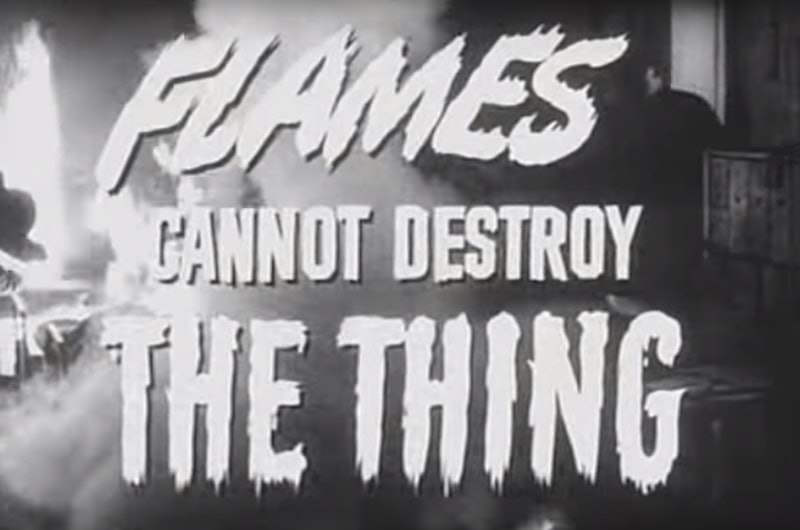 Despite whatever technical advancements, creative innovations, and intellectual maturity we’ve seen throughout the long history of Hollywood cinema, we’ve held fast to the tradition of the B-movie. The infamous label began with the rise of the double feature during Hollywood’s Golden Age. The expression referred to inexpensive genre pictures that studios would tack onto the package of spotlighted feature releases when they sold them to movie houses. Even after the dissolution of this practice in the late 1950s, the B movie term and tradition stuck. In fact, even in our modern age, there are plenty of scary B-movies that are still worth watching today.

Just as cinema on the whole kept changing, so did B movies — throughout the form’s evolution, though, it stuck fairly rigidly to a darker sensibility. In the ’30s, they were largely Westerns. In the ’40s, crime noir pictures. The ’50s brought about that hokey science fiction form, the '60s splatter flicks, the '70s expanded exploitation films, slashers, martial arts flicks, midnight movies, Z-grade cinema, all kinds of cult films… it’s been quite a tradition. And one worth revisiting, especially when stirred by Halloween to explore the dark crevasses of human creativity.

Here are a few terrifically odd, twisted, and qualitatively questionable B movies from all eras of Hollywood to enjoy, in whatever way you please, this Halloween.

You’ve got to fill your B movie lineup with some of the great efforts in self-unaware cheesiness, too. Outings like the all but forgotten 1940 movie Mysterious Doctor Satan (no “The,” mind you) are chock full of everything you want from a schlocky pre-Cold War era sci-fi/horror, from blocky dialogue to some seriously underwhelming robotology.

Though revered today as one of the best filmmakers in Hollywood history, Alfred Hitchcock was known the industry over as a purveyor of B movie fare. In case you’ve already seen all of Hitchcock’s most celebrated works — like Vertigo, Rear Window, North by Northwest, Psycho, Notorious, Strangers on a Train, Rebecca, and the great Rope — the lesser seen ’42 picture Saboteur would be a perfect addition to your B movie marathon. This story of wrongful accusation relies Hitchcock’s panache for all-purpose intrigue.

You couldn’t make this list without ensuring that at least one Ray Harryhausen joint made its way into the mix. The visual effects legend created delightfully fearsome creatures from beyond the sea in this ’53 damning of humanity’s scientific hubris. What’s so invigorating about watching films like 20,000 Fathoms today is their representation not only of the kookiness of individual directors, but of a cultural psychology that now seems too distant from our own to even imagine.

4. The Thing from Another World

The precursor to John Carpenter’s masterful The Thing might not boast the cultural acclaim of the ’82 remake, but it is a pretty decent science fiction movie in its own right… even if it does get a little broad and over the top in some of its more extreme contortions.

Faster, Pussycat! Kill! Kill!'s title alone should sing “B movie” at the highest volume. Though maligned at its 1965 opening, the kidnapping-themed exploitation flick has earned the favor of critics and filmmakers alike, even transforming in the eyes of feminist writer B. Ruby Rich to something of a cherished reappropriation of misogynist devices.

Much to his chagrin, Roger Corman has long been called the father of the B movie, directing and producing counterculture flicks from the ’50s onward, and in droves. His ’67 picture, written by none other than Jack Nicholson, peers deep into the demented psyche in a way perfectly befitting of the B movie tradition.

As tried and true as any other cinematic tradition is that of the B movie: the sort of film you love not despite, but for, all its outdated, misguided, regrettable elements. Although the '40s, '50s, and '60s gave us some of the greatest B cinema we have yet to know, the phenomenon still goes strong today. Celebrate your Halloween (the high holiday of B movies) with some of these old glories, or perhaps a contemporary entry. You've seen SwimFan, haven't you?