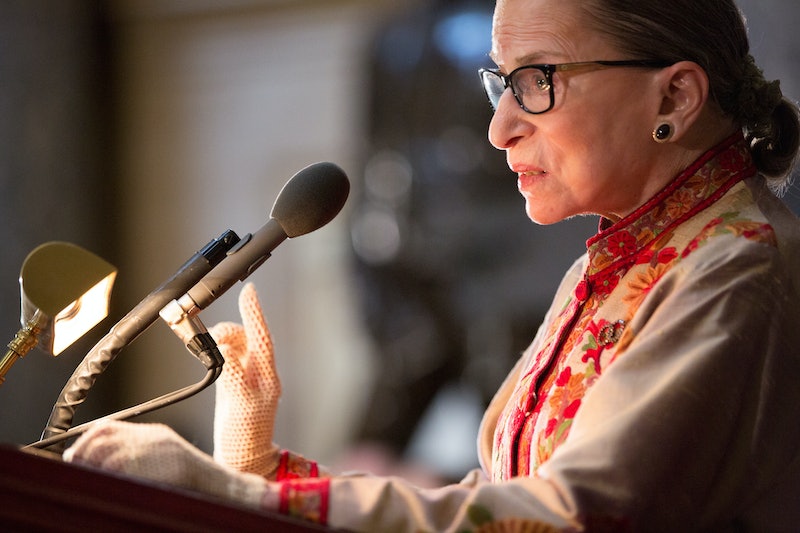 Supreme Court justice Ruth Bader Ginsburg hasn't made history by being silent. She is well-known for her dissents, such as in Burwell v. Hobby Lobby, which allowed private corporations whose founders or CEOs are Christian to refuse to cover certain types of birth control in their insurances plans under the claim that it violates their religious freedom. Ginsburg is so well-loved by those who care about social justice that a viral Tumblr about her, "Notorious R.B.G.," has now been turned into a book by its creator, Shana Knizhnik, and journalist Irin Carmon.

To celebrate the release of The Notorious RBG, Lena Dunham and activists have shared why they dissent in a New York Magazine video. The video shows why dissents like Ginsburg's are crucial to American principles.

The Notorious RBG features interviews with Ginsburg, her family members, her friends, and her colleagues, as well as passages from her legal writing with annotations from legal minds. The book's chapter titles are inspired by Notorious B.I.G. lyrics, such as "Don't let 'em hold you down, reach for the stars," and the appendix features photos of people dressed up as Ginsburg and popular images from the Tumblr. Ginsburg landed on the court because of her work as an attorney championing women's rights, but she has made history in the position by disagreeing. Her dissents are often lengthy and fiery, showing that her dedication to the law stems from a deep, unforgiving attitude that human rights are the foundation of the U.S. constitution.

It's these dissents that make Ginsburg a justice who won't be forgotten, and that show Americans why disagreeing isn't something to shy away from. Here are eight amazing reasons people dissent from New York Magazine's video "I Dissent: A Tribute To Ruth Bader Ginsburg."

"I dissent because everybody deserves an opportunity to achieve the American dream."

"(I dissent) because women deserve their constitutionally protected rights to access abortion services."

"I dissent because I'm in this diner right now, and I've asked for my tea like three times and I'm scared to ask for it anymore because somebody's going to call me a bitch. Also, abortions."

"This is Ruby, and we dissent a system that only cared about her before she was actually born. You matter now, don't you?"

"I dissent because the policing of people's bodies and genders is not OK."

"(I dissent) because we live in a country that has only elected one African American woman to the Senate, and it was 25 years ago."

"I dissent because we've been dealing with this shit for way too long."

More like this
Spice Girls’ Net Worth: The Richest Member Is Wealthier Than The Rest Combined
By Hugh McIntyre
How To Fight For Reproductive Rights, Based On How Much Time You Have
By Courtney Young
Plan C Vs. Plan B: What's The Difference?
By Lexi Inks
Harry Styles Called For "Backlash" In Powerful Statement On Abortion Rights
By El Hunt
Get Even More From Bustle — Sign Up For The Newsletter