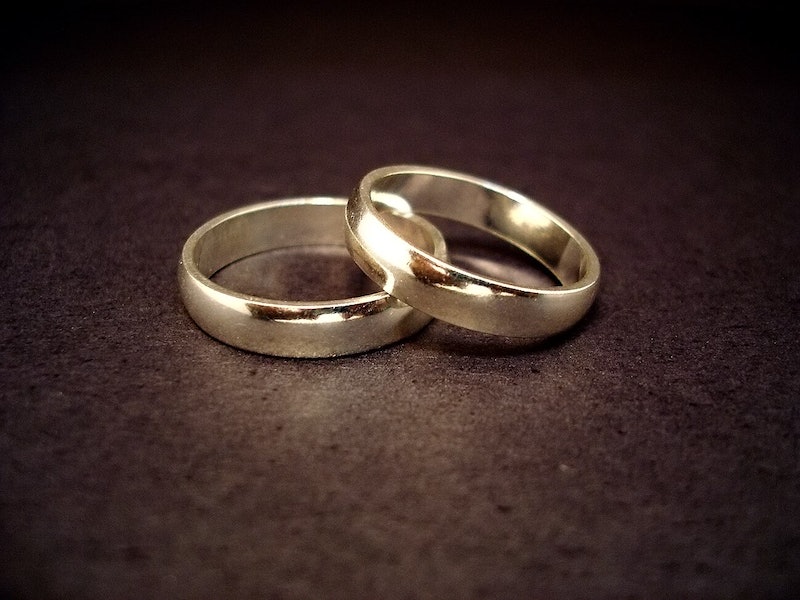 There's a piece of sex advice that's going viral right now, but not for the reasons you might assume; in a post published earlier this month on the site BiblicalGenderRoles.com, Larry Solomon, a Christian blogger, advised a man to avoid looking at his wife's face if she wasn't enjoying having sex with him. And actually, that wasn't even the worst of what Solomon had to say. But Solomon's comment was far from an isolated way of thinking — instead, it's the tip of a very disturbing iceberg.

In response to a question from a "young husband" whose wife wasn't showing much interest in sex, conservative blogger Solomon (which is a pen name) did not recommend that the young man look into any number of healthy options, like having an open and honest conversation with his wife about her sexual desires, suggesting that the couple could try mixing things up in bed, or any number of other things that might benefit both partners.

Instead, Solomon framed sex as a duty that women owe to their husbands, painting a wife's lack of sexual interest as some sort of failing she is responsible for fixing. Solomon went on to say that wives have no right to refuse to have sex with their husbands. I'll repeat that last part: Solomon apparently doesn't think that men need consent in order to have sex with their wives.

And if those men are bothered by the fact that their wives aren't into sex? In the BiblicalGenderRoles.com post, Solomon urges men to just ignore their wives' faces:

I know you love your wife, most of us as men love our wives. You want to connect with her physically AND emotionally during sex. But your wife is the one refusing to connect with you emotionally, so you have to concentrate 100% on the physical side.

There are not enough showers in the world.

There's a lot wrong with Solomon's advice. He tries to claim that it's Biblical, citing Corinthians 7:4, "The wife hath not power of her own body, but the husband: and likewise also the husband hath not power of his own body, but the wife." Which he somehow seems to think means that husbands alone have a say in when a couple has sex — I guess he dozed off during the second half of the verse (though if so, I suppose he isn't the only one)?

But in truth, Christianity teaches people to love one another and not to do harm, and having sex with someone without their consent (also known as rape) has been shown to do great harm. Christianity does not condone rape. And Christianity definitely does not give men the right to rape their wives.

Sadly, Solomon is not alone in his thinking. In some Christian circles, teachings around sex and marriage frame sex as a duty in marriage, and though these teachers might be less explicit about what this means than Solomon is in his post, the implications are still there.

Fortunately, there are a lot of Christian thinkers who are pushing back against this culture and trying to put forth new ways of thinking about marriage, sex, and consent in a Christian context. So here are five people whose opinions on sex and Christianity deserve a lot more attention than Larry Solomon's.

In 2013, Sarah Bessey managed to start a widespread conversation about purity culture and its place in Christianity with a blog post about her experiences being shamed for having had sex, entitled "In Which I Am Damaged Goods." In the post, she offered a different view: "There is no shame in Christ’s love. Let him without sin cast the first stone. You are more than your virginity – or lack thereof – and more than your sexual past."

She elaborated on her thoughts:

No matter what that preacher said that day, no matter how many purity balls are thrown with sparkling upper-middle-class extravagance, no matter the purity rings and the purity pledges, no matter the judgemental [sic] Gospel-negating rhetoric used with the best of intentions, no matter the “how close is too close?” serious conversations of boundary-marking young Christians, no matter the circumstances of your story, you are not disqualified from life or from joy or from marriage or from your calling or from a healthy and wonderful lifetime of sex because you had – and, heaven forbid, enjoyed – sex before you were married.

The whole post is excellent, and since it went viral she has continued to write about marriage, gender roles, and women in the church, among many other topics.

Since even before Bessey's essay brought the topic into the forefront, Dianna E. Anderson has been writing about the problems with purity culture — as well as writing about LGBT issues in the church (Anderson herself is bi), which naturally also intersect with the church's views about sex and marriage. In addition to being an active blogger, writing on everything from marriage to sex to church scandals to academic discussions, Anderson has written a book, Damaged Goods: New Perspectives On Christian Purity , in which she presents an alternate set of Christian sexual ethics.

In other words, she literally wrote the book on purity culture and the need for change.

Christian blogger Sarah Moon writes a lot about the intersection of faith and feminism, covering topics like abortion and using feminine labels for God. She also has a series of posts analyzing Christian dating guides. Spoiler alert: there are a lot of awful ones out there.

In her first post in the series, Moon writes, "No one wins in purity culture, except the people who wish to use it to abuse, control, and cheat. Why do churches keep conflating it with gospel?"

The No Shame Movement Tumblr is a great place for anyone who is either looking to either learn more about purity culture or trying to break free of it. They offer ways to educate yourself about sex and other resources, but even more importantly, they offer a place for people raised in purity culture to to share their stories.

In their view, "The biggest problem with [purity culture] is that the general assumption is that people are incapable of making healthy decisions on their own, and need blanket rules for what they should and shouldn’t do with their own bodies." As such, they believe that, "We don't need to 'rethink' purity culture, we must dismantle it altogether."

Tope Fadrian runs the blog Are Women Human?, which tackles "issues of gender and sexuality in Christian communities, and broader social justice issues in the church." The blog deals with everything from rape to the intersections of race and gender in Christianity, including the topsy-turvy sexual ethics in many Christian churches. For instance, in one post delving into the arbitrary nature of what some Christians consider to be sin, Fadrian writes:

So disowning one’s child for being gay, leaving them homeless and without a way to provide for themselves – that’s not a sin. A consensual relationship between two people of the same gender, though, really pisses God off. Premarital sex? Definitely a sin. Sexually coercing your wife (e.g., by telling her that she can never turn you down when you want sex)? God is totally cool with that.

These and many other voices are slowly but surely changing the conversation in Christian churches about sex, sin, and purity culture. And they all deserve way more attention that Larry Solomon and his messed up views about sex and marriage ever will.