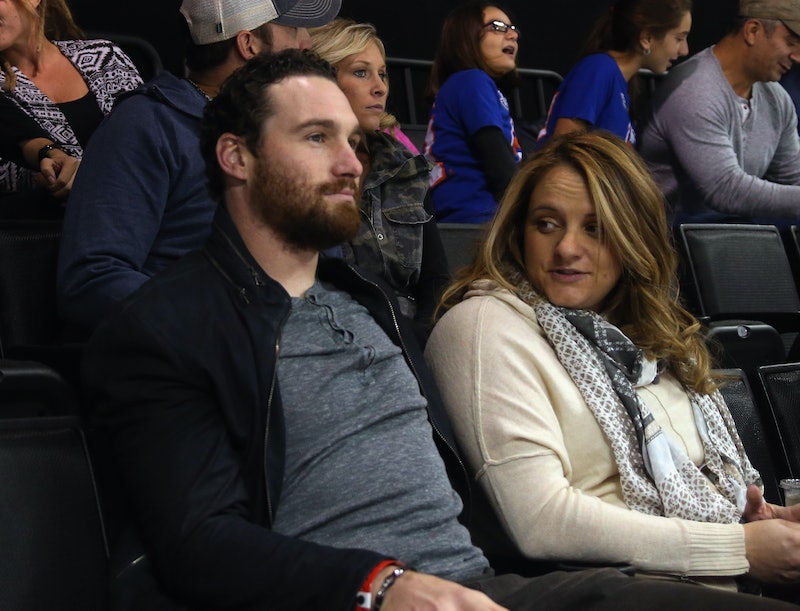 Whenever any sport reaches its post-season championship glory, there is at least one player who emerges as a star. Now that the New York Mets have sailed into the World Series this year against the Kansas City Royals, New York Mets second baseman Daniel Murphy has everyone talking — and not just hardcore baseball fans. During the playoffs, Murphy set a record when he hit a home run in six straight playoff games, so this guy has already earned his place in baseball history. With hearing so much about him and now seeing him on TV during the World Series, it's natural to get a little curious about the details of his life, including his family. So, who is Tori Ahern, Daniel Murphy's wife of almost three years?

Last year, Murphy and Ahern made headlines in the baseball news front when he chose to take a few days off for paternity leave in the beginning of the season last April. Many sports commentators slammed the decision, but it said a lot about Murphy and his commitment to his wife. He later told ESPN of his decision, "It felt, for us, like the right decision to make."

Let's look into Tori Murphy, the lucky lady who is standing by her man during this World Series 2015.

They Are Both From Florida

Murphy was born and raised in Jacksonville while Ahern hails from Jupiter, Florida.

Ahern attended the University of North Florida from 2005 through 2008 and was a star pitcher for The Ospreys. As a freshman, she earned the honor of Peach Belt Conference Pitcher of the Year and Freshman of the Year.

She Has Also Coached Baseball

While pregnant with their first child, Noah, Tori stayed home back in Florida to serve as an assistant coach for her fathers high school softball team.

They Are Both Committed To Their Family

After the drama surrounding his paternity leave, Murphy was invited to speak at a Working Families Summit at the White House in June 2014. He said in his speech of his priorities, "I think it’s going to go so much further in that I’m the one who cut his umbilical cord. And long after they tell me that I’m not good enough to play professional baseball anymore, I’ll be a father. And I’ll be a husband. So that was a reason, on the front end, that I wanted to be there for my wife and for my son.”

Sounds like Ahern and Murphy have a strong foundation in their relationship and family. Which is a good thing, because considering his popularity, their lives are only going to get crazier.

More like this
Jake Daniels Just Became The UK’s First Active Football Player To Come Out As Gay Since 1990
By Sam Ramsden
What Is Jeanie Buss' Net Worth? The Lakers President Is Uber Rich
By Hugh McIntyre
‘RHOBH’ Newcomer Sheree Zampino Is Still Close To Ex-Husband Will Smith
By Brad Witter
Justin Timberlake Dated A Spice Girl Back In The '00s — But It Only Lasted 2 Weeks
By El Hunt
Get Even More From Bustle — Sign Up For The Newsletter