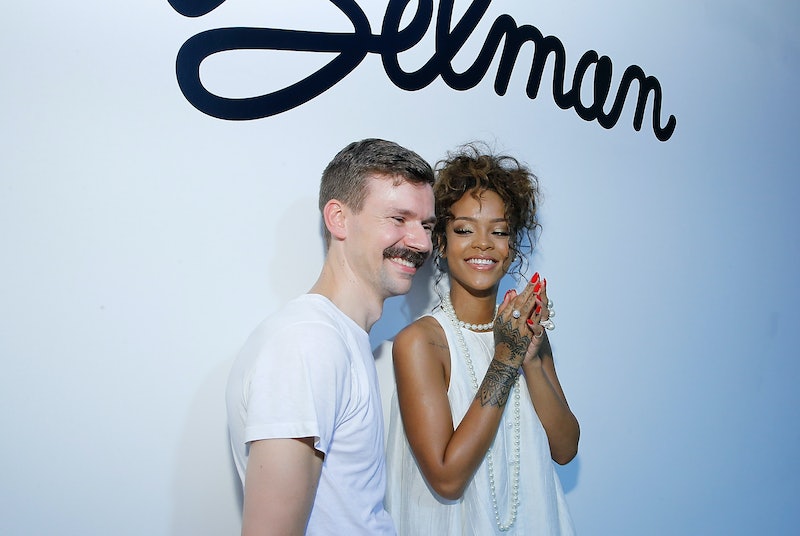 Don't you just hate when you're all bundled up and have to rummage through your purse to find your credit card? Well, soon you won't have to. In a collaboration with MasterCard, Adam Selman is creating wearable technology like you've never seen it before, according to Refinery 29. Move over smart jewelry — smart clothing is finally here!

Selman — who is the designer behind Rihanna's see-through CFDA look — is making his mark on the wearable technology market. The designer has teamed up with MasterCard to create gloves, sunglasses, dresses and more that contain a mobile paying microchip so you will now be able to pay for items without reaching for cash or plastic.

But the sartorial fun doesn't stop there. Selman has even extended the line to include earring and a clutch. You'll no long have to worry about leaving your card at the bar, a simple slip of the earring is all it takes. I'd say that's some serious ingenuity.

According to the The New York Times, a pair of taxi-yellow checkerboard gloves, two versions of an empire waist tweed dress, and other Selman-designed wearables will be available in 2016. Oh, and they also report that you can still dry clean your dress with the microchip inside.

"[MasterCard] gave me total leeway; the idea was less about a specific product than about changing how we think about paying, which is what designers need to do: push boundaries, think about what’s next," Selman told The New York Times .

I'd say this definitely pushes the boundaries.

This might be the first line that allows people to pay with your clothing, but it's not the first wearable tech to hit the market. While you're waiting for that tweed mobile paying dress to come out, check out these awesome futuristic items that can make your life easier right now.

This scarf is made for all the germaphobes out there. According to the website, "Each Scough comes with an activated-carbon filter, the same technology the military uses to protect against chemical warfare."

At first glance — heck, even at third glance — you would never expect this ring to be wearable technology. The accessory connects with your phone to give you alerts, so you're never out of the loop.

The creme de la creme of wearable tech! This watch is basically a phone and fitness tracker all in one, and there are so many ways to customize it.

Instead of wearing a heart rate band, why not just invest in something you'll definitely need? This bra has a spot for your tracker to snap in to give you extra stability during your workout.

With the clip of the little white box, you can turn any pair of glasses you own into a pair of smart glasses. The device will let you see your heart rate, the distance you've run, and even how far away you are from the hole on the putting green.

Designed specifically for women, the LEAF tracks ovulation, sleep, and distance walked/ran. It comes as a clip on, bracelet, or necklace so that you cans stay stylish while you track your fitness.

Want more cutting edge fashon? Check out the video below, and be sure to subscribe to Bustle’s YouTube page for more hacks and tricks!