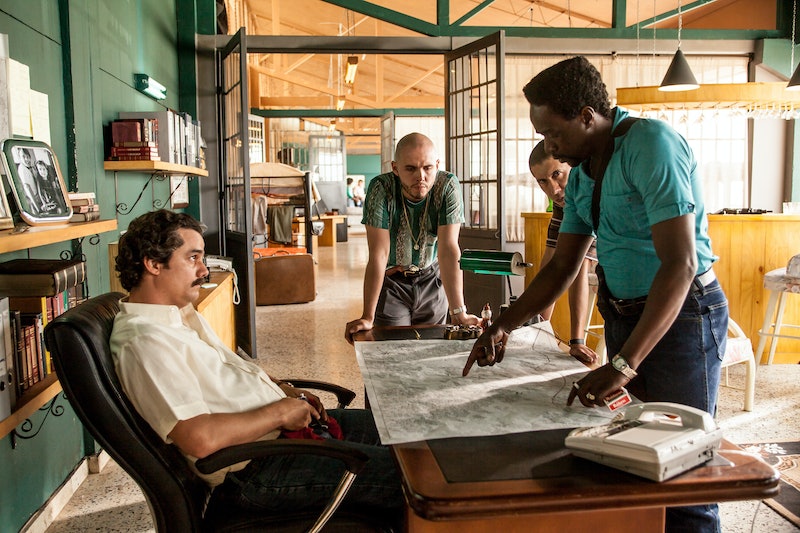 The first time I watched the Season 1 finale of Narcos , titled “Despegue,” there was a lot I didn’t know. A.) I didn’t know Narcos would be renewed for Season 2. So I thought this finale could have been THE finale. B.) I hadn’t looked up the translation of the word “Despegue.” If I had, or paid better attention in high school Spanish class, I would have known that “Despegue” means takeoff — and I would have realized that with a title like “takeoff,” the finale obviously intended to launch a second season. This made me wonder, what other things did I not notice in the Narcos Season 1 finale?

The first season of Narcos followed Colombian drug lord Pablo Escobar’s rise to power. The first season also follows the DEA agents fighting Escobar’s reign, though they have their hands tied when dealing with an often corrupt, foreign government. When looking up Pablo Escobar’s rise and fall online, it seems that Season 1 is just part of the story. It looks like Narcos has set up Season 2 to follow how the DEA agents had to hunt for Escobar after he fled his prison, La Catedral.

We see Escobar’s escape unfold in the finale, but what else can we glean from the last episode about what to expect in Season 2? Here are 18 things you notice when rewatching the Season 1 finale of Narcos.

The first time you watch the episode, you don't realize everything that is about to unfold as a result of the newspaper article exposing what is going on inside The Catedral.

2. The Theme Song Makes You Jones For More Episodes

Listen to it while you can!

Even when the gang's all there and you can do coke and have a baller fish tank, a prison of your own making is still a prison. Escobar is so bored/complacent, that he doesn't even tie his shoes. Now, we know that this is foreshadowing, but I'll get to that later.

4. I Can't Believe This Guy Built His Own Prison

So now the President thinks he can calmly intervene under the guise that they are moving Escobar to a traditional prison for his own safety? Yeah right.

5. The Kidnap Scene Is Surprising

Steve Murphy is just minding his own business when all of a sudden BAM, kidnapped. Like the narration states, "But, then again, in Colombia nothing goes down the way you think it will.”

6. The Calm Before The Storm

Escobar is having a peaceful breakfast in the sunshine when nothing goes the way he thinks it will. The trucks roll in...

Yep, this Escobar quote sums up the entirety of the episode.

8. Javier Peña Has The Best Response To "What Are You Doing Here?"

"I forgot my socks."

9. This Dude Is A Billionaire — But That's What He's Wearing Today?

That sweatshirt is so '90s.

Bad move Sandoval. Really dude, what did you think was going to happen? That Escobar was just going to let you walk out of there? And, that the president was going to negotiate with a terrorist for your release? No way!

11. “You Are A Criminal And Criminals Can’t Run Forever."

This quote from Sandoval is a real "Despegue" moment and foreshadows next season's chase!

ESCOBAR IS TYING HIS SHOES! He is preparing to "takeoff" on the run. He also wishes Sandoval "good luck" at their parting. Could this also be a "good luck catching me?" Will Sandoval play a part next season in Escobar's takedown?

When you rewatch this scene, you notice Peña never says he did it. This had me thinking, why would Peña go to his boss and get desperate enough to go to Ambassador Noonan if he had tipped off Cali? Peña would have gone to Cali or done nothing about the kidnapping if he was guilty. I just don't think he did it.

The calmness of the morning — the cocaine, the fish tank — is a stark contrast for the terror and chaos that night. And, yes, the fish tank gets shot.

She's on the run too, I wonder if she and her husband run into each other?

This is home!? Poor Connie.

17. Are Connie And Steve Going To Part Ways?

The symbolism of Murphy staying outside after the argument and his wife going into the house says to me that he is staying in Colombia and she is going home to America. Just a guess.

And he means it.