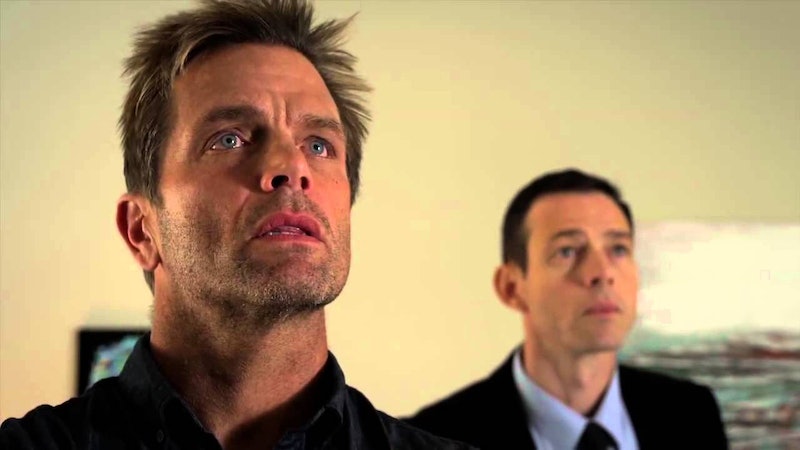 It's no secret that many of Lifetime's movies revolve around kidnapping stories. Earlier this year, the network aired Kidnapped: The Hannah Anderson Story and Cleveland Abduction, both of which were adaptations of high-profile cases that grabbed headlines and captivated the nation in 2013. Lifetime has also recently aired fictional abduction stories, such as Stockholm, Pennsylvania and 16 And Missing, which aren't based on specific incidents but borrow from trends and behaviors that are often present in kidnapping cases. So when I saw the trailer for Lifetime's upcoming movie, the first thing I asked myself was is Online Abduction based on a true story?

The synopsis for Online Abduction, which was originally titled Cyber Case, is certainly a disturbing one — and it immediately raises concerns about how we may unwittingly compromise our safety by tagging our locations on social media.

In order to help her mom and stepdad, Isabel agrees to watch over her 3-year-old half brother, Tommy. One afternoon at the park, the unthinkable happens—Isabel takes her eyes off Tommy for only a moment, and he vanishes. The stress of losing Tommy forms a rift between Isabel and her parents—as well as the revelation that the pictures Isabel posted of him at the park led the kidnapper to him. As the police unsuccessfully follow their leads, Isabel starts to conduct her own investigation using photos and tracking locations through geo-tags to help identify a potential suspect. It’s through her online sleuthing that the police are able to eventually identify a motive and the kidnapper. It’s a virtual game of cat and mouse as Isabel and her parents desperately try to save Tommy before he’s lost to them forever.

Fortunately, this movie is pure fiction. Although it's certainly plausible that a kidnapper targeting a particular child would use social media to track their whereabouts and identify an ideal time to snatch them, it has not been reported in any real life cases. When it comes to social media, the more prevalent danger is tweens and teens potentially meeting up with individuals they have previously communicated with online.

But, based on the trailer and synopsis for Online Abduction, it appears that Tommy's kidnapper posts his photos to social media accounts after the kidnapping — and Isabel tries to rescue her brother through her own sleuthing:

Here's where the story's fictional status comes in again, because most kidnappers don't live tweet their crimes and lead investigators directly to the victim. That being said, technology has still been useful in recent missing child cases. In November 2014, Ars Technica reported that FBI and law enforcement used a missing 12-year-old girl's iCloud account, Xbox Live gamer tag, and other social media accounts to trace her whereabouts. Thanks to this information, they ultimately located her with Victor Yanez Arroyo, who was charged with kidnapping and rape, according to an NBC Baltimore affiliate. No updates on Arroyo's charges have since been reported.

As technology becomes increasingly sophisticated, it seems likely that investigators will continue to use similar tactics in an effort to narrow down the location of a missing child. (However, that task would realistically be achieved by the FBI and state police — not the victim's sister.) And, even if a child is abducted and all their devices are left behind, social media can still be useful in locating the victim. The AMBER Alert System was instituted in 1996, and initially called for highway signs, TV, and radio broadcasts to highlight the information about the abducted child. In January, the Huffington Post reported that AMBER Alerts will now be posted on Facebook — and they're targeted based on our locations, so we only get notifications of kidnappings that occur nearby.

Although it's implausible that a teenage girl could use social media to single-handedly solve her brother's kidnapping case like in Online Abduction, technology and digital platforms can really be used effectively when children are missing.

More like this
Michael & Kathleen Peterson’s House From ‘The Staircase’ Has New Owners
By Kadin Burnett and Kayla Blanton
Don Crowder Successfully Defended Candy Montgomery, But His Story Ended In Tragedy
By Gretchen Smail
9 Honestly Unbelievable Revelations From The WAGatha Christie Trial
By Frances Stewart
UK Viewers Will Have To Wait To See Jessica Biel’s Killer Housewife Series
By Rachel Mantock
Get Even More From Bustle — Sign Up For The Newsletter