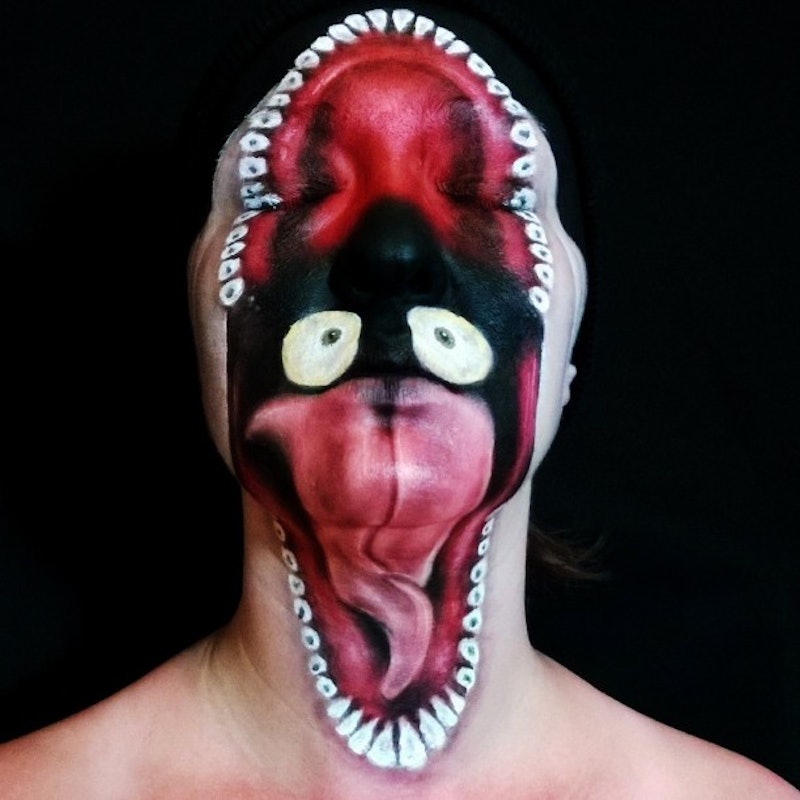 If you are like me and are bored by the same selection of ~sexy costumes~ this year that we see every year, why not avoid them all together and try some terrifying Halloween face makeup instead? Or better yet — why not combine both for a look that will make everyone double take? If you need inspiration for some terrifying looks, look no further than Nikki Shelley's impressive collection of face makeup. By using her artistic abilities to cover her natural features with shadows, she is able to morph them into impossible combinations that will leave you slightly spooked!

Personally, I would like to use these looks as a way to scare off my neighbors from asking for candy. It's not that I don't like kids —I'm saving up for a puppy. Plus, I would love to see their reactions when something like that opens the door. Does that make me a terrible person? I hope not. Nikki Shelley is a mother of three, so I feel if she thinks it's cool, obviously other kids will think it's baller — right?

Since the Kardashian's have made contouring and strobing their life missions, I noticed a lot of similarities from that makeup style and the more scary face makeup below. There is a similar use of lights and shadows, tricks to contour your eyes, and LOTS of blending. One technique creates flawless faces of Hollywood, but this one makes flawless Halloween makeup that surprises and alarms. It's really cool to see the different applications of similar techniques. If you need Halloween inspiration look no further, below are some of my favorite looks Nikki has created.

If Nagini and Voldemort had a baby, I think it would look something like this.

It's that creature that killed Captain Jack Sparrow in the second pirate's movie!

I call this... Bad Day At The Dentist.

This is the perfect look to scare your neighbor's children. Do I advise you do this? No. But you should. Just don't blame me if you aren't invited over to their potluck dinners.

Finally, the answer to the age old question —what do the creatures that live in the NYC subway tunnels look like.

My favorite. I wasn't kidding when I said I'm saving for a puppy.