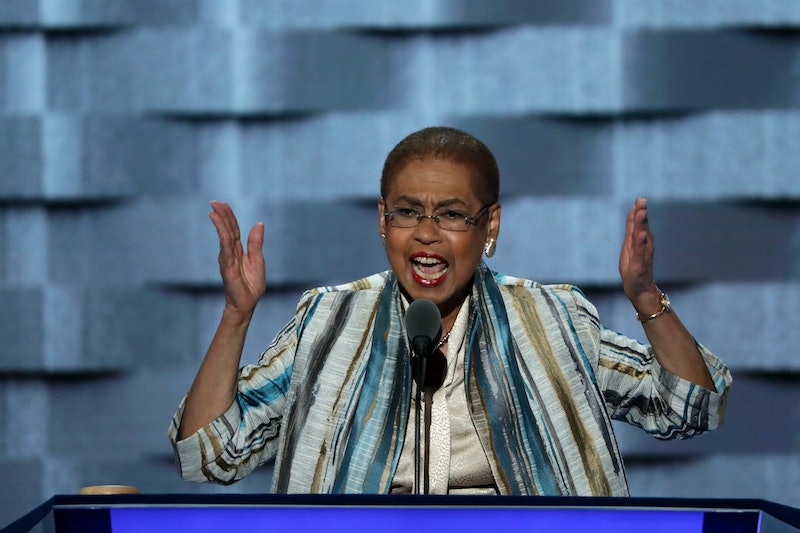 If you take a look at photos of the United States Congress, you'll notice something pretty quickly: It's really white and heavily male. In 1916, Jeanette Rankin of Montana became the first woman elected to the U.S. House of Representatives. But women of color didn't follow until the early '20s. Now, there are 432 women of color working in federal and state legislatures, according to Political Parity, and there are plenty of powerful political women of color you should know.

Women of color held elective office as early as 1924, when Native American Cora Bella Reynolds Anderson was elected to the Michigan House of Representatives. But only recently have they started breaking into the federal sphere. The first woman of color wasn't elected to a federal position until Shirley Chrisholm became a Representative for New York in 1968.

Currently, there are 33 women of color in Congress, and nine in statewide executive elective office. But that isn't enough. Women of color understand not only the discrimination that comes with their gender, but also the violence, aggression, and inequality inherent in being nonwhite. Further, when these women hold elective office, they combat stereotypes associated with their races. Women of color prioritize issues that have to do with families and human rights, such as the unaccompanied minors who were dropped at the U.S.-Mexico border in April, or the racial disparity of the prison population. Here are six women of color in politics whom you should know more about.

Norton, a Democrat representing the District of Columbia, is in her 13th term. In 1977, she was appointed by President Jimmy Carter to be the first female chair of the U.S. Equal Employment Opportunity Commission. During her tenure, she held the first hearings in the country on discrimination against women. Most notably, in 1970, Norton represented 60 female employees of Newsweek who filed a claim with the EEOC that Newsweek was discriminating against women with a policy which said that only men were allowed to be reporters.

One of Norton's most well-known quotes came in 1965, when she was a lawyer for the ACLU. She argued for the First Amendment rights of a white supremacist group in front of the Supreme Court and won. Though she knew that the kind of speech she was protecting was targeting people of her race, she fought for it anyway:

Waters has been a public servant for 37 years, according to her government homepage. She is the most senior of the 12 black women currently serving in Congress. Before she was elected as a Democratic representative for California, she helped passed laws that — at the time — was controversial for the state, including landmark affirmative action legislation and the prohibition of police strip searches for nonviolent misdemeanors.

Now, Waters focuses heavily on environmental issues, poverty, and equal justice under the law. Her Twitter feed shows clearly her passion and dedication to working as a public servant.

She also didn't hold back about the racism and sexism she experienced. In 1989, she testified in a federal court about racism in Dallas' city government, and in 1992, she filed a formal complaint with the Justice Department asking it to investigate the harassment of local black students. During those investigations, she told the Times that racially discriminatory governments have dangerous impacts on youth of color:

Dallas is at a crossroads, and I am frightened. I am frightened to see young people who believe that a racist power structure is responsible for every negative thing that happens to them. After a point it does not matter whether these perceptions are true or false; it is the perceptions that matter.

In 2010, Johnson was elected the first African American and first female member of the House Committee on Science, Space and Technology. She continues to emphasize the need to invest in STEM education.

In 1992, Velázquez, a Democrat from New York, became the first Puerto Rican woman elected to the House of Representatives. She was born in Yabucoa, Puerto Rico in 1953, one of nine children. She started school early, skipped a few grades, and started college at the age of 16. Four years later, she became the first person in her family to receive a college diploma.

During her time as the Director of the Department of Puerto Rican Community Affairs, she started one of the most successful Latino empowerment programs in the U.S., called "Atrevete" or "Dare to Go for It!" She has recently been involved with legislation aimed at reducing gun violence, providing more educational opportunities for Hispanic people in science, protecting HIV-positive people from discrimination, and enforcing a living wage.

Lee, a Democratic representative for California, has been fundamental in the introduction and passage of almost every piece of HIV/AIDs-related legislation in the Unites States. She is also pretty famous for holding unpopular opinions. She was the only member of either chamber of Congress to vote against authorizing military force after the terrorist attacks of Sept. 11, 2001. Further, she has been staunchly against the death penalty since she was elected to Congress.

She is popular in California for her focus on safe communities, affordable housing, and helping the homeless. Lee also spoke out against a bill that would've defunded Planned Parenthood, and called out Republicans specifically:

First of all, this bill won't keep women safe, and it certainly won't keep them healthy. Instead, it would prevent individuals or organizations that provide abortion services from treating women enrolled in Medicaid. And it would simply strip women of their fundamental right to choose their own health provider. Congress already denies federal Medicaid coverage of abortions — which is wrong and that needs to be repealed — now excluding doctors from Medicaid patients is yet another attack on the rights of low-income women. When in the world are you going to stop?

Hirono is a Democratic senator representing Hawaii. She was the first elected female senator from the state, the first Asian-American woman elected to the Senate, and the first U.S. Senator born in Japan. Hirono credits her mother, whom she watched work minimum wage jobs with no benefits when they first immigrated to Hawaii, for her success:

Of course, I owe much to the courage and determination of my mother. My early childhood was spent on my grandparents’ rice farm in Fukushima, Japan. My mother sent me to live with my grandparents because of family circumstances. My father was an alcoholic and compulsive gambler and I did not get to know him much. As a result, our family had little stability or money. At times, he would even sell my mother’s belongings to gamble away.

Thanks to her mother's courageous decision to leave her father, Hirono was able to get an education in Hawaii and then attend a university. She said that it was during that time that she "saw how important it was for underserved populations to be heard," according to her website. Hirono has been a fierce advocate for women's abortion rights. She voted "No" on the bill that outlawed the use of public funds for abortions, and voted "Yes" on a bill that required pharmacies to refill birth control prescriptions without intimidating, threatening, or harassing customers. She also spoke out loudly against the Republican move to defund Planned Parenthood:

I see this bill and others like it as nothing else than an assault on women’s health. What else can you call it when defunding Planned Parenthood will result in 2.7 million women in this country not getting the cervical cancer screenings, mammograms, treatment for sexually transmitted diseases, and other health care they need.

More like this
10 Times Boris Johnson Got It Wrong On Trans Rights
By El Hunt and Sam Ramsden
Cardi B Explains To David Letterman Why She Uses Her Star Power For Politics
By Jake Viswanath
Michigan’s Governor Is “Going To Fight Like Hell” To Protect Abortion Access
By Andrea Zelinski
How To Fight For Reproductive Rights, Based On How Much Time You Have
By Courtney Young
Get Even More From Bustle — Sign Up For The Newsletter