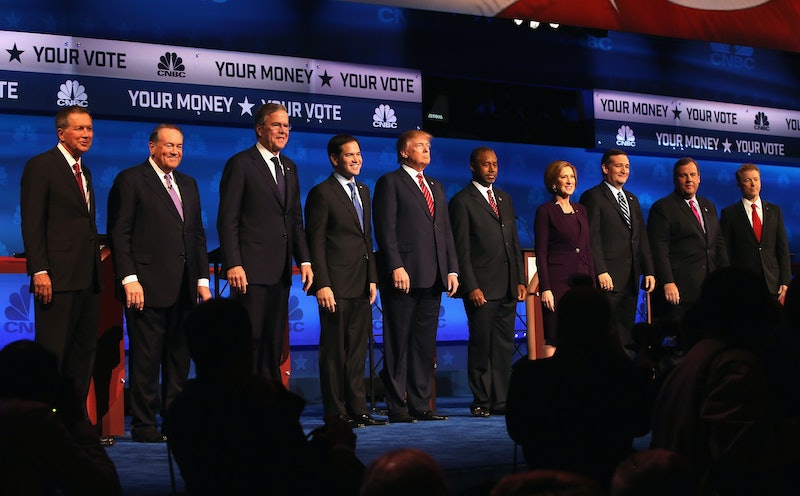 Wednesday night was a big night for the slowly dwindling field of 2016 GOP presidential candidates. At the third televised debate in Boulder, Colorado, the remaining 14 Republicans took to the CNBC stage to debate topics such as climate change, tax reform, and trade policy — and as usual, there were plenty of fireworks to keep viewers entertained. Ranging from the hilarious to outright jaw-dropping, Twitter was flooded throughout the evening with plenty of GOP debate memes that perfectly captured the atmosphere inside the University of Colorado Coors Event Center.

Previous debates have provided plenty of comedic fodder for the social media sphere's biggest smart alecks. "Let the games begin," wrote the official House of Cards account in a tweet early in Wednesday's primary showing. "Will you get a little bloody? Yes, probably. But that's what people want in their debates."

Of course, Twitter is a gold mine in terms of hysterical public discourse for both the every-man and high profile figures alike. At the second GOP primary debate in mid-September, Democratic candidate Hillary Clinton got in on the action herself, tweeting a popular meme to portray her disbelief at the Republican candidates' continued stubbornness over the June 26 SCOTUS gay marriage ruling. "When the GOP is still against marriage equality even though it's the law of the land," Clinton tweeted over a picture of herself with closed eyes, looking exasperated.

On Wednesday, viewers watching the third GOP debate seemed equally as entertained, posting rollicking photos and videos in reaction to some of the evening's biggest lines.

Things got rolling early, with several Twitter users posting about their own debate preparations:

Others joked about the lineup, for better or for worse:

A few turned their sights on the audience:

Some Twitter users got bored with the early festivities and decided to do their own thing instead:

Donald Trump continued to rant about building a wall along the U.S. southern border, and Twitter had a field day:

The unemployment rate remained a popular topic, although at least one Twitter user had something to say about that...

After Texas Sen. Ted Cruz began angrily criticizing the moderators for their lines of questioning, one user whipped out the Photoshop:

The Detoit Pistons even decided to throw their hats into the ring, seeming 100 percent done with the evening's festivities:

After the moderators and former Florida Gov. Jeb Bush shared a jovial exchange on fantasy football, Twitter could barely contain its glee:

Then there were the just-plain-weird (but still hilarious):

Democratic PAC Emily's List managed to get in the last word, channeling Hillary Clinton herself to poke fun at the evening's showdown: