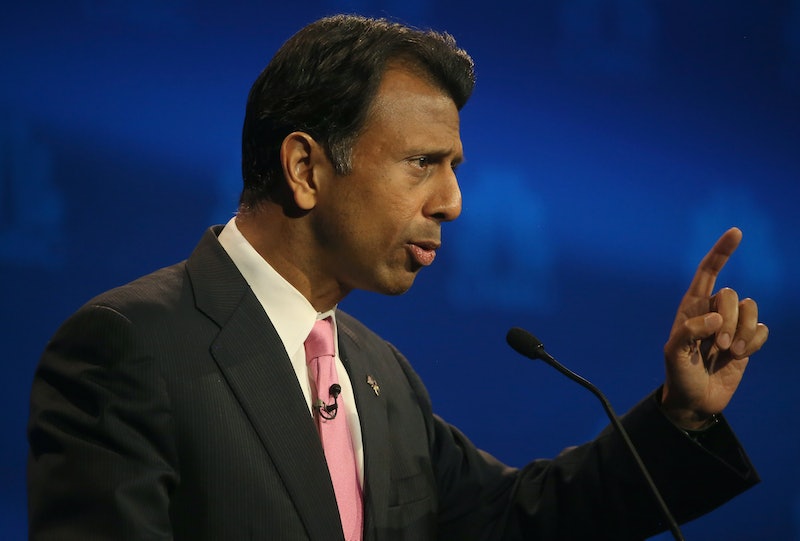 As Donald Trump, Ben Carson and the rest of the gang prepare for the third Republican primetime debate, the other GOP candidates in the race are duking it out in the pre-show "kid's table" debate. While, let's face it, none of the four candidates on stage really have any chance of winning the nomination, one aspect of the debate drew a lot of attention: Bobby Jindal's pink tie. In fact, judging by the response on social media, it drew far more attention than anything the Louisiana governor actually said on stage.

Jindal, who was once hailed as "the Republican Barack Obama," has failed to gain traction in his bid for the GOP nomination. His tie, on the other hand, is another story. The bright pink neckpiece — in contrast to the red, blue, and grey ties worn by the other three candidates — became a topic of heated debate on social media. One Twitter user proclaimed the tie "the winner" of the debate; another armchair pundit said it was "too pink for him to be president." Those represent the extreme positions, of course: One centrist commented that the tie's "color was good but not well tied."

One thing's for sure: The chatter about Jindal's tie overshadowed any conversation about his garden-variety policy positions, which did little to make him stand out from the GOP crowd.

The best line of the night on Jindal's tie, though, came courtesy of Guardian U.S. opinion editor @megancarpentier.

More like this
Michigan’s Governor Is “Going To Fight Like Hell” To Protect Abortion Access
By Andrea Zelinski
How To Fight For Reproductive Rights, Based On How Much Time You Have
By Courtney Young
LGBT+ Men Fleeing Afghanistan Were Denied Asylum By The Home Office, New Findings Show
By Sam Ramsden
Twitter Is In Utter Meltdown After 'Derry Girls’ “Poignant” Finale
By Sam Ramsden
Get Even More From Bustle — Sign Up For The Newsletter