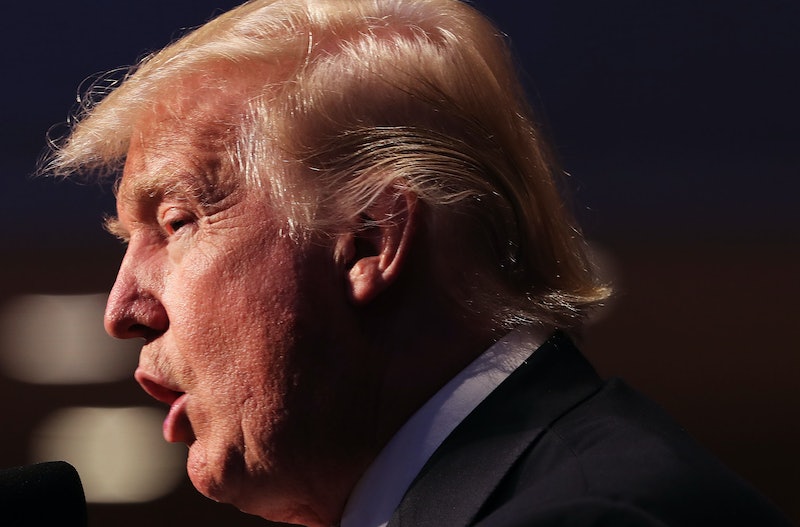 As the GOP candidates take the stage on Wednesday night, there was a showdown for the ages — and no, I don't mean between the presidential hopefuls. I'm talking about the showdown between debate moderator Joe Kernen and Donald Trump's hair. Who wears the stiff blonde side comb look better?

There's a lot of suspense and wonder surrounding both men's hair. Are their comb-overs real? Is it a toupee? And how do they even get that look? Both of them maintain that the hair is real. Kernen, the host of CNBC's Squawk Box, even went so far as to allow someone to take a leaf blower to his head to prove to audiences that he doesn't have a toupee or hair plugs.

Let's pause for a moment and concern the mental image of someone taking a leaf blower to Trump's face.

Admittedly, Trump has a major advantage going into this battle. His hairdo is much better known. It's a national phenomena that everyone — from cats to caterpillars — is trying to emulate. But I have a feeling that Kernen is going to give him a serious run for his money. The debate may be a real game changer as we get the two men in one room to compare: who has the better hair?

Kernen is the man in the middle with the gravity defying hairdo.

And This Is Trump's Hair

People Have A Lot Of Questions About Both

You know your hair has made it to the big leagues when it has it's own Twitter account. Kernen has one... but Trump's hair has three.

But Regrettably, Trump's Hair Is Already Stealing The Debate

Sorry, Kernen. Your hairdo may look more natural, but Trump's hair is a real heavy hitter. No matter what happens, it will always attract more media buzz than half the GOP field combined.