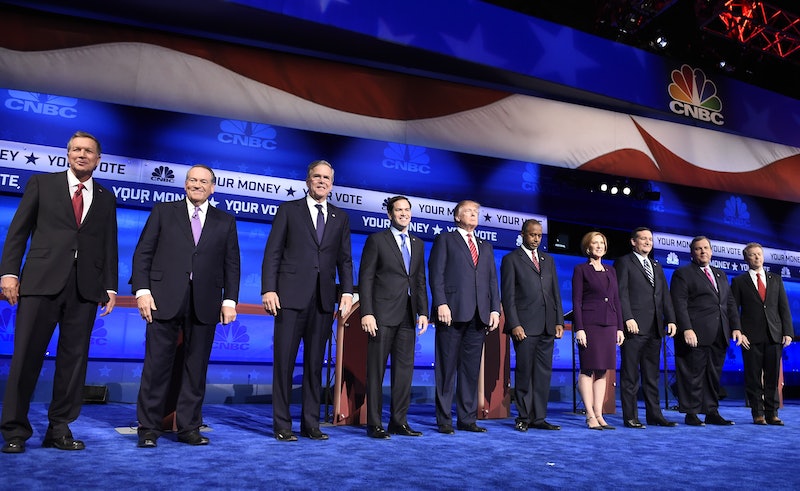 In Wednesday's third GOP debate, Republican candidates had the chance to set themselves apart from their like-minded competitors. Surprisingly though, they didn't have the opportunity to lay out their unique visions for the country in opening statements, which left many viewers wandering: Why weren't there opening statements in the third GOP debate? After introducing each candidate on the stage, CNBC's moderators, Carl Quintanilla, Becky Quick, and John Harwood jumped right in with a question, asking the Republicans what their biggest weaknesses are.

The lack of opening statements came as a surprise after CNBC agreed to allow candidates time for opening and closing statements in response to Donald Trump's and Ben Carson's demands for them, as well as limiting the debate to two hours. Trump and Carson threatened to pull out of the debate if the network didn't compromise, and CNBC agreed to the format. The moderators' first question didn't allow for opening statements, but many of the candidates completely ignored the question and launched into a statement that sounded very similar to a rehearsed opening statement. They may have been dodging a real answer because they didn't want to actually list their weaknesses, or they might have been keen on voicing their planned statement about their political beliefs.

It seems that CNBC changed its mind about giving Trump and Carson the debate format they so desperately wanted, but it's unclear why or when they made the switch. I'm willing to bet Trump was not very happy about the change, though he did answer the question. Trump said: "I think maybe my greatest weakness is that I trust people too much. I'm too trusting." So much for the opening statement he spent days rehearsing in front of the mirror.