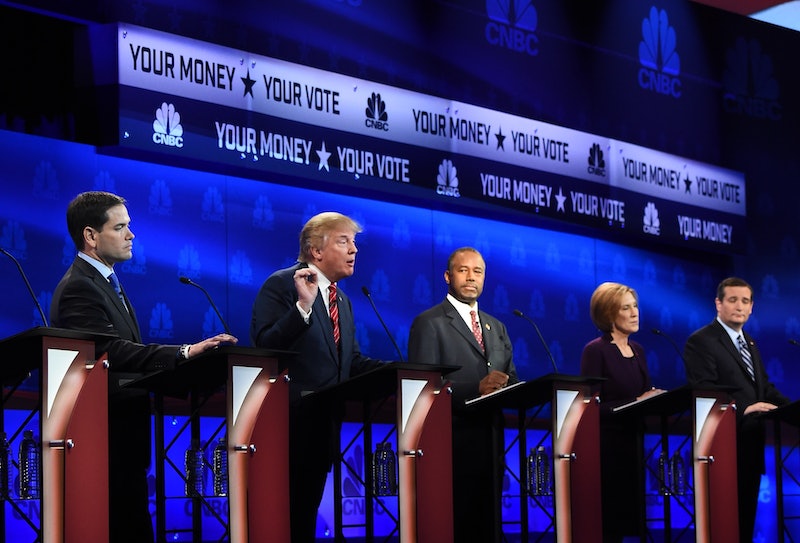 Following a question by CNBC moderator Carl Quintanilla at Wednesday night's GOP presidential debate about raising the federal debt ceiling, Senator Ted Cruz managed to turn what could have been a dry (and substantive) answer into everyone's favorite sport: railing on the liberal media. "The questions that you've asked so far in this debate illustrate why the American people don't trust the media," Cruz said to huge applause. "Nobody watching at home believed that any of the moderators had any intention of voting in a Republican primary. The questions that are being asked shouldn't be trying to get people to tear into each other." Cruz asked. "It should be what are your substantive positions."

"This is not a cage match and you look at the questions: Donald Trump, are you a comic book villain?" Cruz said. "Ben Carson, can you do math? John Kasich, will you insult two people over here? Marco Rubio, why don't you resign? Jeb Bush, why have your numbers fallen? How about talking about the substantive issues people care about?"

"The contrast with the Democratic debate where every fawning question from the media was which of you is more handsome than wise," he went on. "The men and women on this stage have more ideas, more experience, more common sense than every participant in the Democratic debate," Cruz said, to more applause.

To be fair, Cruz wasn't the only one railing on CNBC Wednesday night at the GOP debate. Twitter was having a field day well before his comment, with commentators on the Left and Right alike expressing their disbelief first over the lead-up to the debate, which featured a befuddled group of moderators who struggled to kill time before the debate finally began. And once things got started, well, it didn't get much better, (according to Twitter, anyway).

Others, (liberals mostly) were impressed with CNBC... or at least defended the moderators using sarcasm, as liberals are wont to do:

Personally, I was definitely not impressed with the moderators pre-debate. But the fact that they managed to anger and challenge the candidates into a halfway-substantive debate (OK, that might be a stretch) certainly makes them better than FOX News, in my book.