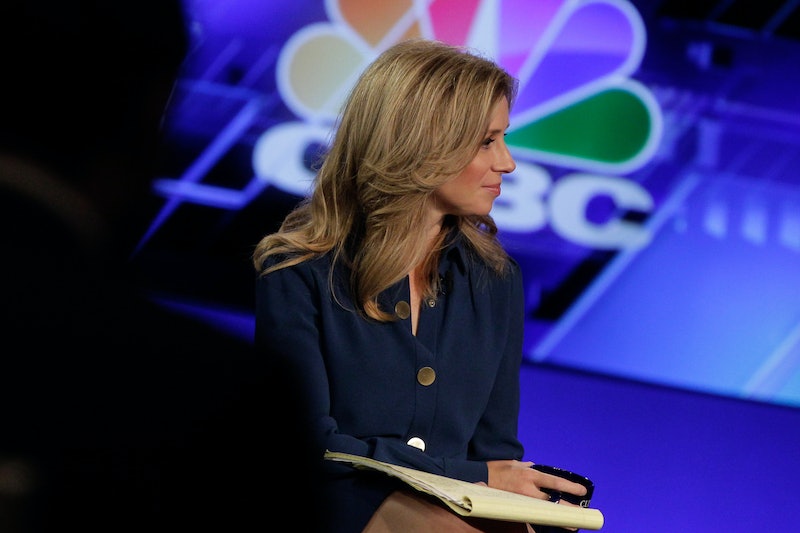 The third Republican primary debate, which aired Wednesday evening on CNBC, was moderated by CNBC journalists Carl Quintanilla, Becky Quick, and John Harwood. But unfortunately, Quick wasn't treated the same as her fellow moderators, and it appeared to be just for simple fact that she's a woman. After just a few questions in the debate, Quick had already been interrupted multiple times, leading to her apologize several times while asking questions and cutting the candidates off for time reasons. Many Twitter users, too, shared sexist comments about Becky Quick and her performance as a moderator at the debate.

Sexism in politics is nothing new, but Wednesday's GOP debate is a stark reminder that gender equality in the United States still has a long way to go. Quick wasn't the only victim of sexism at the event, either. During the first round of questioning, in which the moderators asked the candidates what their greatest weaknesses were, former Hewlett-Packard CEO Carly Fiorina revealed that after the second GOP primary debate, she was told that she didn't smile enough, a criticism that would likely not be given to a male presidential candidate. (Luckily, Fiorina owned the criticism, offering a perfect smirk that Abbi and Ilana would have approved of.)

Becky Quick was chosen to moderate the debate because of her extensive reporting experience, and she deserves respect from the debate audience, Twitter users, at-home viewers, and from the candidates themselves. Using gendered terms to describe someone whose political views you don't agree with won't change their viewpoint — it only reflects poorly on you.

Correction: An earlier version of this article misconstrued a tweet as sexist. We apologize for this error.