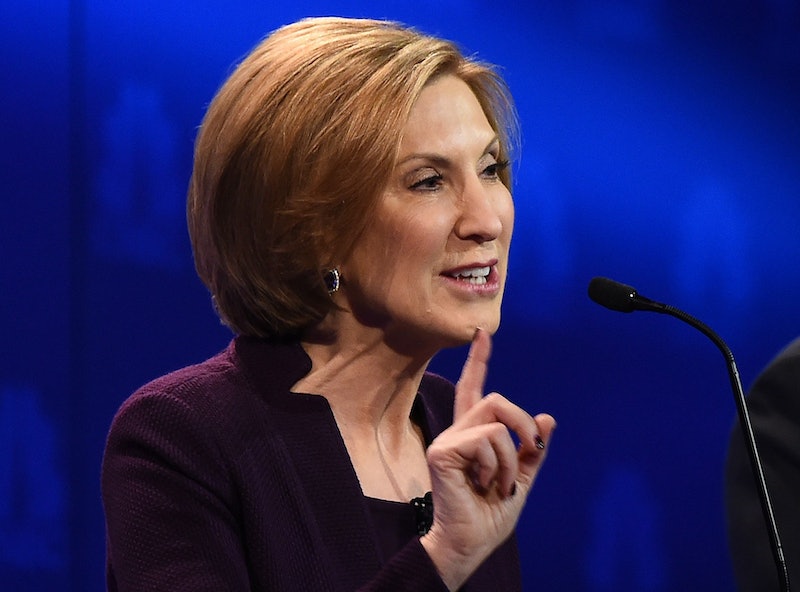 In Wednesday night's third GOP debate in Boulder, Colorado, Carly Fiorina claimed that 92 percent of the jobs lost during President Obama's first term in office belonged to women. This isn't the first time that Fiorina has pulled out this statistic — she cited it in a Wall Street Journal op-ed she published October 26, which purported that Hillary Clinton and Obama caused many women financial distress. That statistic sounds really damning, but is this claim about women's job loss true?

No. The "92 percent" stat has been largely debunked. When Mitt Romney first used it in 2012, PolitiFact said it was "mostly false." And The New York Times also called it "flawed" on Wednesday.

Here's the deal. When Obama took office in January 2009, 66.9 million American women were employed. And that number had risen a bit (to 67.1 million) by the end of his first term, in January 2013. Employment increased for both men and women, with the overall number of employed Americans rising from 142.15 million in 2009 to 143.32 million in 2013. However, while the number of Americans employed increased during those four years, the unemployment rate also increased, due to a growing population. Confusing, I know. In January 2009, the unemployment rate among women was 7 percent, and in January 2013, it was 7.8 percent.

So if you look at only the unemployment rate, it would seem like women lost jobs. But that wasn't actually the case — there were more unemployed women of working age at the end of Obama's first term, but millions of women didn't lose their jobs. It's very easy to cherry-pick statistics to support any given point, but it's important to look at the bigger picture to fully understand what's happening.